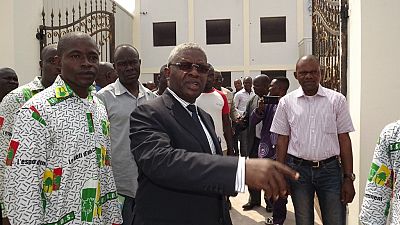 First opposition party in Congo-Brazzaville, the Pan-African Union for Social Democracy (UPADS) celebrated Thursday its 30th anniversary, with the ambition to regain power it lost in 1997 by arms.

At the party's headquarters in a popular district of Brazzaville, dozens of activists and leaders gathered for the occasion to visit a photo exhibition on the life of Pascal Lissouba, its founder.

Several testimonies were also made by personalities, mainly former ministers.

Pascal Tsaty Mabiala, first secretary of the UPADS, drew up the balance sheet of a party that has experienced ups and downs in three decades of existence.

"There have been pitfalls, victories, advances and setbacks. This is the life of a political party. We do not pretend to win everything or to succeed in everything," he told AFP, rejoicing that the UPADS is still present on the national political scene.

"We are still here. We are the first opposition party. It is true, if we compare ourselves to the Congolese Labour Party (PCT, in power), in terms of elected representatives, we are far behind," added Mr. Tsaty Mabiala.

The UPADS is the only opposition party to have a parliamentary group in the National Assembly.

"The opposition is not our cup of tea," he continued. "Our ambition is to take responsibility for solving the problems of the Congolese people because we have the capacity to do so.

Pascal Lissouba was the first democratically elected president of Congo-Brazzaville in 1991. He was ousted from power in 1997 after a bloody civil war by the current president, Denis Sassou Nguesso, 78 years old and 37 years in power, with the support of Angolan troops.

Mr. Lissouba died at 89 in exile in August 2020 in Perpignan, France, where he was buried.