The sound of samba music is once again reverberating through the dance halls of Rio de Janeiro as troupes return to the rehearsal floor after months of coronavirus restrictions.

While the pandemic forced the cancellation of Carnival for February 2021, many expect a blow-out performance for the festivities early next year.

Dancers and band members from the Padre Miguel samba school in the western suburb of Rio practised in their auditorium Tuesday night.

It was the first time the 100-strong ensemble had been able to gather since the pandemic first hit Brazil.

City authorities had prohibited all such gatherings as infection rates and deaths from the coronavirus prompted strict restrictions on crowds and social gatherings.

But now, with increasing vaccinations and lowered infection rates, samba schools are back in action, a welcome development for thousands of participants who spend much of the year preparing for the annual Carnival.

"Now is the time to bring everyone together," said Padre Miguel's leader Oscar de Lima Filho during the rehearsal, adding he believed 90% of the school's members had received a first dose of a COVID-19 vaccine.

Performers twisted and twirled to the heavy beat of samba on the dance floor in an exuberant first rehearsal bringing dancers and musicians together after a long absence.

"People got sick not only because of COVID, but it also left people with a lot of anxiety, and that caused a lot of disorders, and samba for those who don't know, is a cure for the soul," said Padre Miguel dancer Tuane Paula Ferreira, who also works as a nurse. 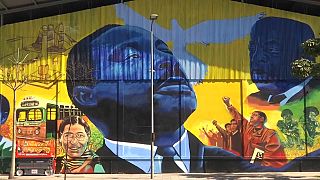