German Pharmaceutical company BioNTech, which developed a coronavirus vaccine with US giant Pfizer in record time, said on Monday it aimed to start trialling a malaria vaccine by next year.

The vaccine would be using the same breakthrough mRNA technology which is at the core of Covid-19 vaccines to help fight the mosquito-borne disease, which kills more than 400,000 people every year, mainly young children in Africa.

Scientists believe mRNA vaccines, which provoke an immune response by delivering genetic molecules containing the code for key parts of a pathogen into human cells, could be a game-changer against many diseases.

They also take less time to develop than traditional vaccines.

This project has been applauded and is backed by the Africa Centers for Disease Control and Prevention as well as the EU and the World Health Organisation.

"mRNA technology is helping us to save lives from Covid-19 and diseases that we have only known about for 19 months. Malaria has been with us for millenia. Eradicating it has been a long-held but unattainable dream," WHO director general Dr. Tedros Adhanom Ghebreyesus commented on the vaccine project.

"We still have a very long road to travel but this is an ambitious and purposeful stride down that road. WHO remains committed to walking and working with you, our partners, until we reach our destination: a world free of malaria," Dr. Terdos added.

BioNTech said it was also looking at setting up an mRNA hub in Africa, so that future vaccines can be manufactured and distributed on the continent.

A project, that will surely help in the fight against the terrible disease, as many hope to eradicate malaria in this generation.

"We are witnessing the start of a revolution in medical science, the revolution of messenger RNA," European Commission President Ursula von der Leyen said at Monday's online launch event.

"Eradicating malaria is now a realistic goal and now we know that it can be achieved already in this generation," the EU Commission President stressed.

In a conference call with reporters, BioNTech CEO Ugur Sahinsaid he believed BioNTech's malaria efforts have "a high likelihood for success".

The fight against malaria received a boost in April when researchers from Britain's Oxford University announced that their Matrix-M vaccine candidate had become the first to surpass the WHO's threshold of 75-percent efficacy, in a study on infants in Burkina Faso. 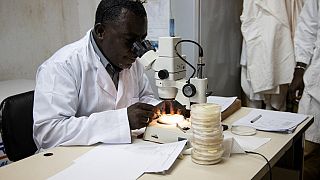