The trial of pro-Biafran independence leader Nnamdi Kanu, which was due to resume on Monday in Abuja before the Federal High Court of Nigeria, has been adjourned to 21 October, his lawyer told AFP.

The leader of the Independence Movement for the Indigenous Peoples of Biafra (Ipob), who has been advocating for the secession of southeastern Nigeria, was arrested abroad after four years on the run and brought back to Nigeria at the end of June.

Nnamdi Kanu was first arrested in October 2015, but he took advantage of his bail to leave Nigeria in 2017.

"The trial has been adjourned to October 21" because the authorities failed to present Nnamdi Kanu before the court, his lawyer Aloy Ejimkaor told AFP.

The judge said that "the trial could not start without the accused being present", the lawyer added.

Former Biafra, a deprived region in the southeast mainly populated by the Igbo community, was the scene of a bloody civil war between 1967 and 1970.

After the death of more than a million people, notably from famine, and the failure of the rebellion, the "Republic of Biafra" was finally reintegrated into Nigeria, a country of nearly 200 million inhabitants regularly shaken by intercommunal tensions.

The arrest of Nnamdi Kanu comes after months of unrest in the region and the creation of a regional paramilitary movement.

At least 127 police and security forces have been killed and some 20 police stations and election commission offices have been stormed since the beginning of the year, according to local media. IPOB denies any accusations of violence.

Calls for secession in southeastern Nigeria are one of the many challenges facing President Muhammadu Buhari before his term ends in 2023.

Another activist, Sunday Igboho, who is campaigning for the creation of a "Yoruba" nation in southwestern Nigeria, was arrested last week at Cotonou airport in neighboring Benin.

He was due to be brought before a judge in Cotonou on Monday. About fifty people, members of the Yoruba community in Benin, were waiting outside the court to show their support, an AFP journalist noted.

In early July, Nigerian security forces raided his home in southwestern Nigeria, where they allegedly found weapons of war and arrested 12 men and one woman.

Sunday Igboho managed to escape during the raid and was actively sought before being arrested by the Beninese police.

Nigeria accused him of "launching a violent insurrection against the state. 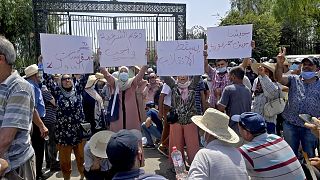