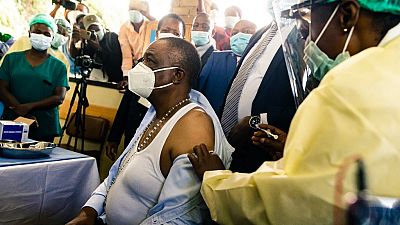 They stand in line for hours and sometimes leave empty-handed: by putting pressure on those who are slow to get vaccinated, Zimbabwe has succeeded in pushing thousands of people into health care centers but without enough doses to go round.

Caregivers were recently given a two-week ultimatum to get vaccinated or they would not be covered in case of infection.

In the markets, only vaccinated vendors will be allowed, as well as in the tobacco and cotton sales rooms. The body that regulates the grain trade has announced that it will only buy from vaccinated farmers. But in front of the health centers, the lines are getting longer from 04:00 in the morning and sometimes nothing happens.

Demand is very high, says a spokesman for the country's main hospital, Parirenyatwa Central. "It makes us very happy and we vaccinate a thousand people a day," Linos Dhire told AFP.

"We've made an effort to manage the world, we don't have huge queues anymore, it's a bit more manageable," he added.

Miriam Tuwe, 29, tells AFP she had to wait five days and stand in line for hours before her first injection. Molline Makokove, 38, was vaccinated in April but is struggling to get a second dose.

"At the time, there were very few people, it was settled in half an hour". For the second shot, she was told the doses were not available.

Just over one million people have received a first dose in Zimbabwe, out of a population of nearly 15 million.

At the start of the campaign in February, President Emmerson Mnangagwa warned that those who refused the vaccine would be denied certain public services.

Like the rest of Africa, Zimbabwe has entered a third deadly wave of the coronavirus, with more than 83,000 confirmed cases and 2,600 deaths. The country borders South Africa, the country most affected by the Covid-19 pandemic on the continent,