The corruption trial of former South African President Jacob Zuma began Wednesday more than 25 years after some of his alleged offenses.

Zuma, who was president from 2009 until he was forced out in 2018 amid multiple graft scandals, pleaded not guilty to corruption, racketeering, fraud, tax evasion, and money laundering at Pietermaritzburg High Court.

Among the charges, Zuma is accused of taking bribes from French company Thales to ensure that South Africa signed a multi-billion dollar arms deal with the company in 1999. Zuma was deputy president of South Africa from 1999 until 2005 when he was fired from that role amid allegations of corruption.

Thales, also accused in the trial, pleaded not guilty to racketeering and money laundering.

Zuma was first implicated in corruption by prosecutors in 2005 but charges against him have been dropped and reinstated several times over the years amid allegations of political interference. Most recently they were reinstated in 2018.

Some of the charges against the 79-year-old Zuma date back to the mid-1990s. Prosecutors allege between 1995 and 2001 Zuma and Thales were involved in an organized criminal enterprise. They also accuse Zuma of taking bribes from a former financial advisor as far back as 1995 in exchange for using his political power to advance the advisor's business interests. That corrupt relationship lasted for 10 years, prosecutors said.

Zuma could be jailed for 25 years if convicted.

On Wednesday, Zuma's lawyer filed papers calling for the removal of the chief prosecutor in the case, claiming he was biased and Zuma's right to a fair trial was threatened. The judge said he would consider the application.

Zuma is also facing allegations of corruption while he was president at a separate and ongoing state inquiry into widespread government graft. Zuma has been ordered to appear and testify but has refused to do so, leading the judge overseeing the inquiry to ask South Africa's highest court to jail Zuma for two years for contempt of court. 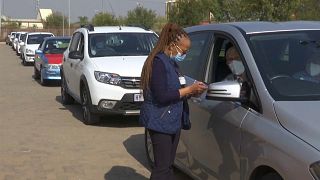