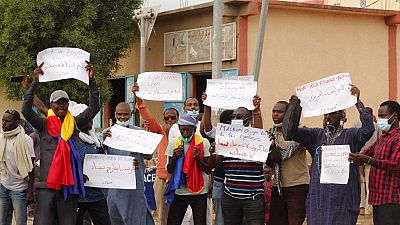 The march was organized by the opposition and civil society in N'Djamena against the junta that took power after the death of President Idriss Déby Itno.

The military authorities on Friday banned rallies planned by Wakit Tama, a coalition of opposition parties and civil society representatives, which had called for demonstrations against the Transitional Military Council (TMC), headed by Idriss Déby's son, Mahamat Idriss Déby, who holds almost all the power.

"About 20 people were arrested by the police and only one person was injured by live ammunition," Youssouf Tom, the prosecutor in N'Djamena, told AFP.

"The police officer who fired the shots was under the influence of drugs and was finally arrested and will be tried to answer for his actions," he added.

In the 6th district of N'Djamena, in the south of the capital, the police used tear gas in the morning to disperse an attempted rally in Fest Africa Square, AFP journalists noted.

The police were massively deployed in the streets of the capital. The rallies were quickly dispersed by the police in the morning. Some tyres were burnt in the streets.

"There were about 15 arrests and a dozen injured, including three serious cases," Wakit Tama coordinator Max Loalngar told AFP.

"The CMT has demonstrated its bad faith and its posture of war when we were asking for an inclusive dialogue to allow all Chadians without exclusion to seek a way out of the crisis honorable to Chad," he concluded.

A small group of demonstrators burned makeshift flags purporting to represent the French flag, in the 5th arrondissement, in the north of the capital.

France has been accused by part of the opposition of supporting the new government since President Emmanuel Macron came to N'Djamena to meet the new authorities for the funeral of Marshal Déby, the only Western head of state to have made the trip.

Chad is a valuable ally of France in the fight against jihadism in the Sahel. Its army, considered the strongest in the region, fights alongside the French Barkhane force, whose headquarters are in N'Djamena.

Since the death of President Déby, Mahamat Idriss Déby has dissolved the National Assembly and assumed the title of President of the Republic.

The new strong man of the country is surrounded by 14 generals, all loyal to his father. He has promised "free and democratic" elections within 18 months, a period that can be extended.

The junta formed on Sunday by decree a transitional government composed of 40 ministers and secretaries of state.

The regal posts are almost all in the hands of members of the Patriotic Salvation Movement (MPS), the party of Idriss Déby.

Two members of the party of the historical opponent of Marshal Déby, Saleh Kebzabo, have entered the transitional government.

Mr. Kebzabo's party has since withdrawn from the Wakit Tama collective.

"Our party has withdrawn and is not calling for a demonstration on Saturday," Saleh Kebzabo told AFP on Thursday.