For the past few days, people in the Republic of Congo have been plunged into darkness amid power cuts in the larger cities.

Small businesses have been hit especially hard as they cannot store their products.

"We here are losing the goods. We have problems with our suppliers. Take the example of this cold room. It does not have a generator. When you keep the fish, you have to pay for the ice cream, " said one salesman.

Another saleswoman said: "For nearly a month here in this neighborhood we have had no electricity. Customers bring us back the goods because they are damaged and we are the ones who lose."

The energy ministry says the power cuts are because of the use of a third turbine at Congo's power station caused voltage variations due to the aging of the redistribution network.

"The 600 MW of electricity that the Congo produces is insufficient to meet the energy needs of the country's major cities, where only 6 percent of the hydroelectric potential is put into operation," says Africanews correspondent Cédric Lyonnel Sehossolo.

The situation will not be resolved for another week says the Technical Director of Congo's Electric Power Company, even if the people are growing impatient.

“They changed the name of the power company two years ago, but it's still the same reality. The new management is doing absolutely nothing," said one Congo resident.

Another said the prices are too high.

"I am heavily in debt because of the national electricity company. The flat rate at Pointe Noir is double the price in Brazzaville. Yet it is the same country," said another resident. 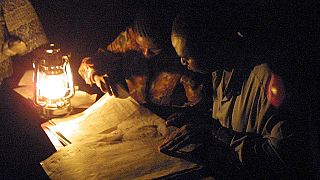