Her Defence lawyer Gatera Gashabana requested for an adjournment of the hearing so his client can ‘’know the content of the file’’.

"I didn't have enough time to prepare the case because it was not possible to see the client. It was only yesterday on the evening, they gave us only 20 minutes and we didn't have the file. The client has the right to know the content of the file, that is why I requested for an adjournment in order to let her have the facility to prepare her defense", Lawyer Gashabana said.

Rwanda’s Investigation bureau said, Munyenyezi is suspected of murder as a genocide crime, conspiracy to commit genocide among others.

The suspect denied involvement in the genocide during her trial in the States.

Munyenezi was deported from the States mid-April. A local newspaper, the New Times reported that the suspected was in the past sentenced to 10 years for fraudulently obtaining U.S citizenship, entering the United States and securing citizenship by lying about her role in the genocide against the Tutsi.

She was recently released from prison after completing her sentence, and then deported.

During the genocide, in the now Huye District, Munyenyezi would stand on roadblocks and check identifications to identify Tutsi.

The suspect is the wife of Arsene Ntahobali, who, together with his mother Pauline Nyiramasuhuko, were sentenced to life in prison by the International Criminal Tribunal for Rwanda for their role in the Genocide against the Tutsi.

Munyenyezi denied accusations of involvement in the genocide during her trial in the United States.

According to the Rwandan Investigations Bureau, the suspect will be detained as investigations continue, before sending her case to prosecution. 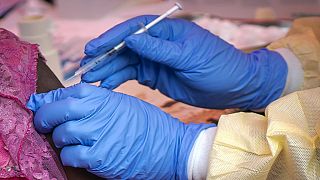