As the sun set over Nigeria's capital Abuja on Thursday, Cardinal John Onaiyekan arrived at the Al-Habibiyah mosque. Almost 2,000 faithful had gathered to perform prayers before breaking their Ramadan fast.

The former archbishop of Abuja had not come to lead mass, rather share Iftar meals.

Minutes later, the prelate was handing out platters to mostly excited young men.

"We are doing our best to spread an attitude of openness because we believe that God does not want his children to kill each other. He wants us to live in peace. So anything we can do to promote peace, we must do," said Cardinal John Onaiyekan.

Nigeria is home to over 200 million people... with Covid-19 affecting incomes and jobs, this year's Ramadan is challenging for many faithful.

Conflict in the north and northeast has also made life worse for millions of Muslims in the country.

Nigeria has been jolted by religious tensions in the past.

"People see that the food we eat was given to us by a Christian clergy, a cardinal that everyone knows," said Fuad Adeyemi, Chief Imam of Al-Habibiyyah Islamic Society said.

"This is not an underground clergy. It shows that we can really live together, that we can be friends and that we can live in peace," he added.

A US panel - the Commission on International Religious Freedom (USCIRF) recommended in a recent report that Nigeria is put on a religious freedom blacklist.

The clergy also prayed for peace in Nigeria which has been hit by a spate of kidnappings targeting schools in recent weeks and attacks on army and civilian targets by Boko Haram. 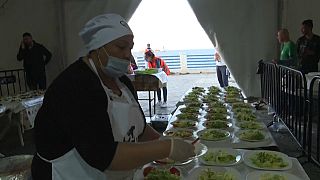