Polls opened on Sunday in Chad's presidential election with incumbent Idriss Deby one of the first to cast his ballot.

The 68-year-old is expected to extend his three-decade rule in the seven-candidate race, facing no major rivals and a campaign in which demonstrations were banned or violently dispersed.

Opposition leaders have called for a boycott in protest against Deby’s leadership.

Chad has been a key ally in the West's anti-jihadist campaign in the Sahel and Deby has campaigned on a platform, promising security.

"The first polling stations have been open since 7:00 am in the capital Ndjamena where we are.

"7.4 million voters are called to the polls to decide between seven candidates, including incumbent President Idriss Deby.

"The offices have already opened behind us but no major crowds yet at 7:00 am but those who have already fulfilled their civic duty expect a massive turnout."

Who is the long-time leader?

Who else is running?

Other than Deby, the six candidates include Albert Pahimi Padacke, 55, a former prime minister under Deby, and Felix Nialbe Romadoumngar, 64, a newcomer to politics who is officially "leader of the opposition" as his URD party is the second largest in the National Assembly with eight seats, after 160 for Deby's PDS.

But seven candidacies were rejected by the Supreme Court and three withdrew, including longtime opposition politician Saleh Kebzabo, who quit in protest over violence by the security forces.

Chad has struggled with poverty and instability since gaining independence from France in 1960.

The country also has deep-rooted issues in unemployment and poverty.

The World Bank said in 2018 that 42 percent of the population live below the poverty line and that unemployment affects 22 percent of people under 25. 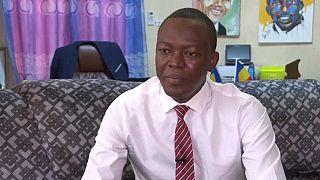