It is still early to get an idea of voter turnout, in the first round of Djibouti's presidential election on Friday.

Incumbent President Ismail Omar Guelleh voted in the capital in his bid for a fifth term and the 73- year-old appeared sure of a win.

"I voted that's it. I'm waiting for the results. I am very very confident," Guelleh said.

Zakaria Ismael Farah, the only candidate facing Guelleh, has not appeared in public.

According to the African Union observation mission, Farah's representatives were absent from the polling stations they visited.

“So far for the offices we have visited, we have not met any delegates of independent candidates," said Ahmed Tidiane Souare, head of the AU Observation Mission.

"Of course we met him, we met the two candidates, he expressed some concerns to us which we tried to resolve within the limits of our observation mission.“

"With a good economic and diplomatic record, Ismail Omar Guelleh highlights his experience and the pledge of stability that the country has represented in the region since his coming to power.

"His challenge will be to reassure the population, weakened by the effects of the Covid-19 pandemic." 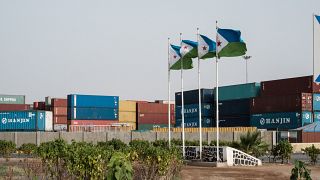