Mozambique's President Filipe Nyusi said Wednesday that jihadists have been "chased" out of the city of Palma, two weeks after armed groups launched a bloody attack on the northern port city.

"The terrorists have been chased out of Palma," the head of state said in a televised address to the nation, adding however that he was "not claiming victory because we are aware that we are fighting terrorism.

On March 24, armed groups launched a raid on this city of 75,000 inhabitants, killing dozens of civilians, police and soldiers. The attack, which was claimed by the Islamic State (IS) group, took place just a few kilometers from the French group Total's gas mega-project on the Afungi peninsula.

Mozambican authorities said they had partially regained control of the town on Monday, with a "significant" number of Islamist fighters killed, the military said.

Thousands of troops have been deployed in recent days, but since the first attacks in 2017, government forces have proved unable to effectively combat the rebels who terrorize the poor but natural gas-rich province of Cabo Delgado, which borders Tanzania.

"Our government has expressed to the international community the needs to fight terrorism and these needs are being assessed," said Filipe Nyusi.

Six chairmen of the Southern African Development Community (SADC) are due to hold an emergency meeting on Thursday to discuss the fight against terrorism in the region.

"Those who come from outside will not come to replace us. They will come to support us," added the Mozambican president, evoking "a sense of sovereignty.

Mr. Nyusi also reiterated his call for amnesty for Mozambicans who have joined the ranks of jihadists. "We are ready to welcome you and reintegrate you into society," he said.

The Palma attack, considered a major escalation since the violence began and whose actual toll is not yet known, has further exacerbated the humanitarian crisis in the region.

Nearly 11,000 people have been displaced, according to the International Organization for Migration (IOM). Some 23,000 others are still on the Afungi peninsula, near the Total site.

The French group has evacuated all its staff and the multi-billion euro project has come to a complete halt.

For the past two weeks, many inhabitants have continued to wander in the bush, without food or access to water, heading for neighboring towns, sometimes a few hundred kilometers away, to find refuge, or towards the Tanzanian border to the north.

Known locally as "al-shabab" ("the youth" in Arabic), the armed groups that are ravaging the region, burning villages and carrying out large-scale beheadings to terrorize the population, have pledged allegiance to the ei group.

The NGO Acled counted 2,600 dead before the Palma attack, half of them civilians. 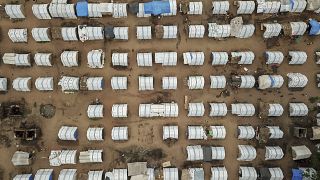