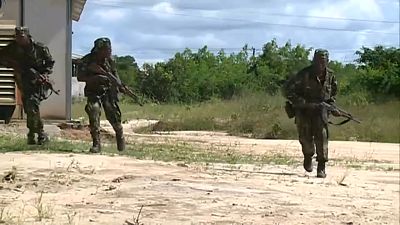 Mozambican military says it is still in search for the insurgents that raided Palma, a town of around 75,000 people in the province of Cabo Delgado, northern part of the country.

Though Mozambican television footage of the town shows that Palma is almost empty, the military says some insurgents remain in hiding and are now coordinating an operation to "flush them out".

**"They are small groups, often mixed with some remaining population that have been making these wear and tear shots at our forces. But, surely, there is not a large terrorist group in the village of Palma, I can assure you."**- Chongo Vidigal, Mozambique Defense and Security Forces Spokesperson

The Islamic State group in Central Africa said Monday it had seized the coastal town of around 75,000 people after days of fighting.

The extremist militants raided Palma last week Wednesday. According to the Human Rights Watch HRW, armed attackers fired on civilians in their homes and on the streets “as they tried to flee for their lives”.

Dozens of people are believed to have been killed since the attack began.

Palma is close to a multi-billion-dollar gas project being built by France’s Total and other energy companies.