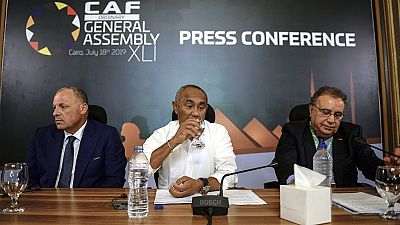 Four men are contending to lead the Confederation of African Football (CAF) as the election is slated for March 12 in Rabat, Morocco. Augustin Senghor of Senegal, Ahmed Yahya from Mauritania, the Ivorian Jacques Anouma and South Africa’s Patrice Motsepe are in a fierce battle for the top job at CAF, the body in charge of African football.

The candidates have mounted an intense campaign for the chance to lead the organization.

CAF President Ahmad Ahmad has been slapped with a five year suspension by the world governing football body, Fifa and he may likely not stand for re-election, even if allowed to do so by the Court of Arbitration of Sports (CAF), where he is appealing the suspension.

First, let’s get to know Senegalese Augustin Senghor. He is known as the one with a wealth of experience. The 55-year old lawyer has been President of the Senegalese Football Federation since August 2009.

Seen as Ahmad Ahmad's unofficial heir, "Senghor is the best of the four, according to an expert in African football. Mayor of Gorée and President of the US Gorée, he knows how to manage a club and a federation, and above all he has no pot to piss in", he said.

The English-speaking Senegalese, presents himself as "a pan-Africanist candidate."

He said his goal is to "tend towards the professionalization of African soccer," continue to enhance the value of club soccer, including through a more attractive African Champions League. Senghor also wants to avoid the ‘’untimely departure of many of our young people to Europe". Gabon, Gambia are his main supporters.

Yahya, 44, is a businessman and President of the Mauritanian Football Federation. The youngest of the four, may not have the experience of the other three, but he has a strong argument: "I brought Mauritanian soccer out of lethargy," he told AFP.

"When I arrived, no infrastructure existed, Mauritania was 206th out of 209 in the Fifa ranking," he said. But we worked as a team, with an executive office, the State and economic partners have accompanied this project, we have gained more than 100 places in the Fifa ranking, participated in our first CAN (2019) and organized our first major competition, the CAN U-20."

"I have the youth, but also the experience of more than 20 years in the soccer world," he added. His supporters are Uganda, Djibouti and Morocco.

Next is Jacques Anouma from Ivory Coast. The 69- year old financier is a former President of the Ivorian Football Federation, between 2002 and 2011. Anouma is also the former member of the Comex of Fifa.

He has proven to be an effective manager of the "Elephants" of the Didier Drogba era, which qualified for their first World Cups in 2010 and 2014.

Already a candidate in 2013 to lead CAF, he was dismissed by a change of rule "timely" because he did not sit on the Comex of CAF as a member but as a representative of Fifa.

At 69, ‘’he is one year away from the age limit and can only run for this mandate," said Bacary Cissé, editor-in-chief of the Senegal newspaper ‘’Record’’.

After recovering from covid-19, Anouma has only recently been able to start his campaign, but he knows the workings of the CAF. His supporters are Benin and Kenya.

And last but not least is South Africa’s Patrice Tlhopan Motsepe. The 58-year old businessman is President of the Mamelodi Sundowns club since 2003.

This captain of the mining industry and brother-in-law of President of South Africa Cyril Ramaphosa, Motsepe is the least known of the four candidates. Many observers see him as the favorite Fifa candidate.

"I want to make my modest contribution in all circumstances to use sport to unite Africans," Motsepe said at a press conference Thursday.

He assured: "We will succeed and we will make African soccer competitive at the international level."

The President of the South African federation, Danny Jordaan, praised "his business acumen, knowledge of governance and global business".

His supporters include Nigeria, Sierra Leone and Botswana. 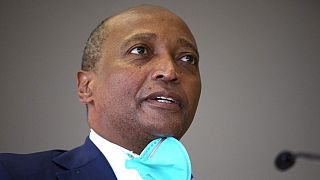 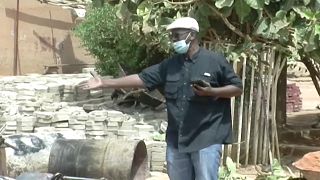