The coronavirus pandemic could lead to more children being recruited by armed groups, the United Nations has warned.

It comes as the world marked the International Day Against the Use of Child Soldiers - also known as Red Hand Day.

“The impact of the COVID-19 pandemic is daunting: poverty and lack of opportunities increase even further push and pull factors for child recruitment and use by armed forces and armed groups as well as sexual violence or abduction. Education opportunities, already disrupted by war and displacement, are further vanishing. Children are tragically paying the highest price and we have the joint responsibility to build a sustainable system that protects all children at all times," said the EU's foreign affairs chief, Josep Borrell in a joint statement with Virginia Gamba, the UN's special representative for children and armed Conflict

Despite efforts to bring an end to the use of child soldiers, girls and boys are still forced into combat.

According to the UN, in 2019 alone, more than 7,740 children, some as young as six, were recruited and used as soldiers around the world.

The Democratic Republic of Congo, Somalia, Syria and Yemen currently have the largest number of child soldiers.

A total of 170 countries have ratified the Optional Protocol of the Convention on the Rights of the Child on the involvement of children in armed conflict (OPAC).

The protocol banned the participation of children under 18 in hostilities, but the practice continues in more than a dozen nations. 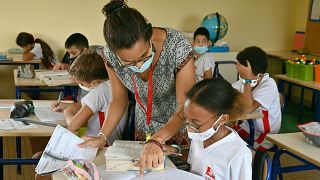