The Second Wave is Deadlier than the First

According to a public address given on Thursday in Addis Ababa by John Nkengasong, the director of the Africa Centers for Disease Control and Prevention, the second wave of the COVID-19 pandemic which sees new variants of the virus reported by experts to be more contagious, is having an even more devastating impact than the first time around — as far as the continental death rate.

Coronavirus vaccines have begun to arrive on the continent with 16 countries having requested a total of 114 million doses of the 270 million doses the African Union has secured from various sources.

"It's just two weeks ago that we announced that the president, President Ramaphosa (of South Africa), announced that we have secured 270 million doses of vaccines. And so that is how we are establishing the process and systems, it's going on. You heard me mention that 16 countries have expressed interest, submitting the applications and those discussions will be happening. Our hope is that in the next two to three weeks they should be having their vaccines because this is an emergency. But I will keep you updated. And, of course, it is our priority to make sure that these vaccines are delivered in a timely fashion so that countries can start vaccinating. But I cannot give a specific date that vaccines will be available."

Twenty African countries including South Africa and Sudan see higher fatality rates than the global average and Africa’s confirmed deaths in the pandemic are approaching 100,000, with more than 3.6 million cases overall. 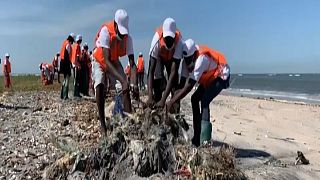