Delegates Call for Peace in the CAR at Summit in Luanda

A Discussion to End the Violence in the Central African Republic

The end of the arms embargo on the government of the Central African Republic may be one of the keys to resolving the conflict in the country - a conclusion drawn at the International Conference on the Great Lakes Region, which met this Friday in Luanda.

Angolan president, João Lourenço, presided over the summit which reiterated the regional support by neighbouring countries for president Faustin-Archange Touadé, re-elected on December 27. A vote contested by armed rebel groups.

João Lourenço, the President of Angola and of the International Conference of the Great Lakes, shared a few impassioned words.

"We cannot passively watch the unacceptable situation in that country, whose legitimate government is inexplicably and unjustly conditioned by UN Security Council Resolution 2536 of 2020 with regard to its essential function of ensuring the security and protection of populations."

Call for a Peaceful Resolution of the Conflict

According to Euronews correspondent in Angola, Neusa Silva, the heads of state at the conference called on all parties involved to resolve their differences peacefully and to express their opposition without violence.

The government officials also called on the rebel groups to observe a unilateral ceasefire, retreat from their positions and put an end to the siege of the capital, Bangui — as they outrightly condemned the violence against the people.

TA resounding call for justice was echoed throughout the international conference.

he presidents of member states of the International Conference on the Great Lakes Region will meet again on February 8 to review developments of the situation and consider solutions for ending conflicts in the CAR. 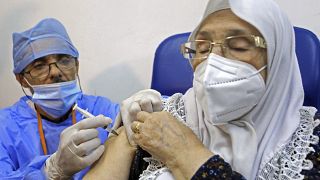