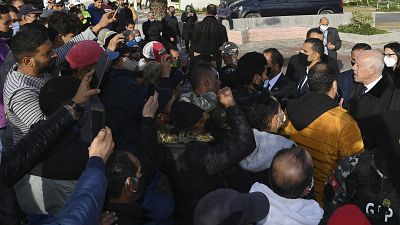 The office of Tunisia's President received a letter containing suspicious powder on Wednesday, according to local media reports.

President Kais Saied is said to be safe and nobody has been harmed. An investigation has been opened.

The letter was reported to have contained the deadly poison ricin but it did not make its way to the leader.

It has not been reported where the suspect package came from but comes as Tunisia has faced violent protests for several weeks that have at times turned into riots.

The demonstrations have mainly been held by the country's youth due to economic hardships.

One young protester was killed in the clashes on Monday.

The protests started on the 10th anniversary of the Tunisian revolution, which unleashed the Arab Spring.

The coronavirus pandemic has worsened the financial woes and put the health sector under pressure.

On Wednesday, police pushed back many demonstrators outside the parliament in the capital Tunis who demanded economic development and an end to repressive police measures.

The latest government reshuffle could also stoke more tensions as four ministers accused of either corruption or conflicts of interest.

President Saied rejected the appointment of the new ministers.