In the club of Olympique Lyonnais, semi-finalist of the last Champions League, the African continent is in the spotlight. While several strikers shine in the French team, a young defender is wisely waiting for his time...

In Lyon, it is not only Zimbabwean Tino Kadewere, Cameroonian Karl Toko Ekambi or Ivorian Maxwel Cornet who represent the continent with dignity, there are also young African hopefuls who are pushing, like the Senegalese Abdoulaye N'Diaye who signed his first three-year professional contract last October.

"Since I was a kid, I've always dreamed of coming to Europe and playing for the biggest clubs," says the 18-year-old centre-back, who is renowned for his long left-foot openings. "When I entered the Dakar Sacré Coeur, I learned that there was a partnership with Lyon and I told myself that there was a shot to play. So I got it into my head to get there, I worked, I trained and it happened quite naturally".

The young 18 year old defender had been playing for two seasons at the Dakar Sacré Coeur where he tasted the Senegalese first division championship to become captain of the U20 national team. His passage to the DSC left a lasting impression, and not only for his performances on the field.

"When Abdoulaye came back from his first national selection with a 750 euro bonus, he handed me the envelope and told me: 'this money is for the club,'" recalls the president of the club in the capital, Mathieu Chupin. "This anecdote describes the character perfectly. He is an exceptional boy. So the first piece of advice I'll give him is not to change in this environment which is very difficult. He will discover a new society, a new culture with a multitude of temptations but he must remain the same...".

Moved by the tragic death of Doudou Faye, he asks young people to be patient.

Abdoulaye N'Diaye remains very attached to his training club. From Lyon, he also closely follows the Senegalese news. In particular, he was deeply moved by the tragic story of the young footballer, Doudou Faye, who drowned on his journey to Europe to try to integrate a training centre for footballers in Italy. "It's so sad to see a 14 year old taking the dugout canoe to come here to Europe. When he was young, he had the opportunity to join the Dakar Sacré Coeur academy or those of Génération Foot and Diambars. I really advise young people to take their time, not to rush, patience is a weapon", assures the young central.

"Patience is a weapon," says the young centre. "Patience is still needed today for Abdoulaye N'Diaye. In Europe's third best training centre - behind Real Madrid and Barcelona - the competition is fierce, even if his new coach, Gueïda Fofana, is already impressed by his ability to adapt: "Honestly, compared to our experience and the experience we have with the players who have come to us before, he integrates very quickly and he is a player we will be relying on in 2021. "

Since his arrival in Lyon last October and before the interruption of competitions due to coronavirus, the left-hander has been able to play a few matches with the reserve team in the National 2 championship (4th division) and also take part in several training sessions with the professional group. But Abdoulaye obviously wants a lot more... "Of course, I dream of playing in this stadium one day", he says, pointing to the Groupama Stadium, a 58,000-seat vessel that stands opposite the training centre's pitches. "Who knows, maybe in 2021 I'll be able to join the first team and show the way for young African hopefuls...". 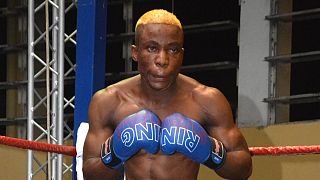