Timber! Trees are Coming Down in Sudan

At the Um Raquba reception camp in Eastern Sudan, dozens of trees are being torn down by bulldozers to create space to build shelters and provide firewood for displaced Ethiopians fleeing the violent conflict in the Northern region of their country, Tigray.

One of tens of thousands of Ethiopian refugees is 65-year-old Zayet Wali, who is building a wooden shelter to protect her sick husband from the blazing sun.

Wali shares how she is getting by way of the wood supply, "I got the wood from a person who was building his house and I collected another pile myself. The machine chops them up for us so they can be ready to use."

A Blow to the Environment

According to the head of Gedaref state health department, Amira Elgada, the equivalent of 65 square metres of trees disappears each day. Their destruction is a serious blow to the environment that has harmful consequences for several plant and animal species. But desperation can sometimes precede ecology.

Abadi Grazdier, another displayed Ethiopian, explains that options are limited, "In my country, I have never cut a branch, it is forbidden, but here I don't have any other solution. We get the wood from over there and use it to make fires. There isn't anything other than the wood to use."

Indeed, Gedaref has a desert climate and in these semi-arid regions, acacia trees are important from an ecological standpoint but for the tens of thousands of Ethiopian refugees making camp at Um Raquba, their main concern to survive by way of a wooden roof over their heads and firewood to cook their meals.

Department head Elgada says the United Nations High Commissioner for Refugees and the Sudanese Commission for Refugees have been asked to provide shelters that do not use wood - such as tents and to deliver gas bottles to avoid using logs.

Since Ethiopian Prime Minister Abiy Ahmed launched a military offensive on November 4 against Tigrayan authorities - vowing to install "legitimate" institutions, over 45,000 people have fled the region. 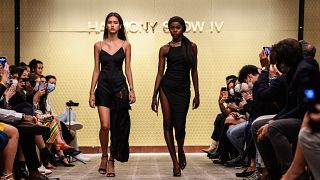