Prominent dissident Guillaume Soro, a former prime minister who was blocked from running in Ivory Coast’s presidential election, called Wednesday on the country’s military to disobey President Alassane Ouattara after he was allowed to win a controversial third term.

Soro’s comments via his Facebook account put him on a direct crash course with his former mentor, and align him more closely with two other opposition leaders still in Ivory Coast who have pledged to push ahead with a transitional government of their own after Saturday’s election.

“I ask you to disobey the illegal orders and join the National Council of Transition. To the defense and security forces, I ask you to look in the mirror, in soul and conscience, and act to stop the killings. You must act to restore our constitution to its former glory,” Soro said.

“Alassane Ouattara is no longer the President of the Republic of Ivory Coast. Put an end to the specter of civil war that threatens our country, you know me,” Soro said, directly addressing defense and security forces.

Soro, a former rebel leader who went on to become the president of the National Assembly, was unable to return to Ivory Coast from France earlier this year when criminal charges were brought against him that his supporters say were politically motivated to derail his candidacy.

He was later sentenced to 20 years in absentia on embezzling public funds and money laundering charges.

Several opposition leaders in Abidjan have had their homes surrounded by security forces since Tuesday when the electoral commission issued results showing Ouattara had won another term with 94.3% of the vote after an opposition boycott.

Ouattara has been in power for nearly a decade. He initially said he would not run again this year but changed his mind after his party’s candidate died suddenly in July. He maintains that the country’s two-term limit for presidents does not apply to him because of a constitutional referendum passed in 2016.

The 78-year-old president, who is popular with international donors, has said he was motivated to run again because of his love for his country. He also has said it’s unlikely he would seek reelection again in 2025.

There have been widespread fears of post-election violence erupting in Ivory Coast, where more than 3,000 people were killed following a disputed vote a decade ago.

Soro said Wednesday that a “nascent tyranny” was forming in the country and he called on opposition activists to continue civil disobedience efforts.

“We must stand up and block the former president, Alassane Ouattara, who has taken the country hostage,” Soro said. “Let’s stand up to say no to the dictatorship.” 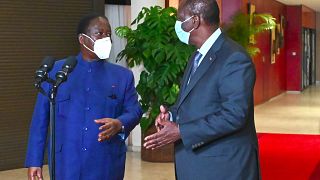