Pushback on Regional Elections
Elections to fill the 190 seats in regional parliament were held on Wednesday in Tigray capital Mekele — against the Ethiopian federal government mandate announcing in March that all contests would be postponed until further notice. This brazen move exemplifies the Tigrayan behavioural independence.

Federal election officials said in June the elections had "no legal basis", and on Saturday the upper house of parliament ruled they were "null and void."

In recent days Abiy's office has instructed the Ethiopian Broadcasting Authority to call journalists working for foreign media outlets to pressure them not to cover the vote. On Monday intelligence agents barred several journalists from boarding a flight from Addis Ababa to Mekele.

Girmay Berhe, Tigray Independence Party leader, shared some words, "So many people have started to question Ethiopia itself, and many in the intelligentsia, the youth, have started to agree with our analysis. At this moment, acceptance is beyond our expectation."

To Secede or to Stay?

At the beginning of the year, the veteran diplomat and former ambassador, Wondimu Asamnew, came out of retirement to head the newly-formed Tigray Friendship Liaison Office, which allows Tigrayan officials to interact with foreign governments, chambers of commerce and cultural bodies.

The office represents an effort by Tigrayans "to explain ourselves to the world," Wondimu said, and to distance themselves from a fraught democratic transition under Abiy that has been undermined by persistent ethnic violence. While the whole country is in shambles, our institutions are working. In this sense, you can say that we are an island in troubled waters."

Tesfaye Gebreyohannes, a local circus from the Tigray ethnic group, expressed his feelings on the cultural matter, director, "Whenever something bad happens they shift blame for everything to the people of Tigray. It’s confusing why it becomes like this. We made a lot of sacrifices for the unity of Ethiopia."

Following anti-government protests that replaced - in 2018, a 3-decade Tigray majority led national governing coalition, by now Prime Minister Abiy Ahmed, ethnic tensions have been on the rise in the country — with mixed murmurs of secession and unity echoed in the Tigray region. 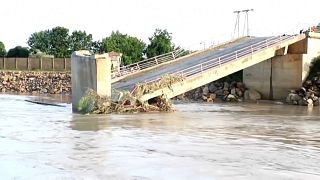