Use of deadly force condemned in Mali unrest [Morning Call] 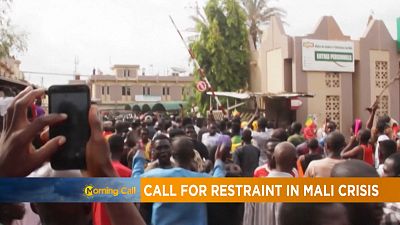 <p>Mali’s government has been facing tough times for a while now but even more is a growing civil unrest. Opponents of the government are unhappy with the handling of the country’s long-running jihadist conflict, an economic crisis and the disputed elections. </p> <p>There are growing calls for President Boybacar Keïta to resign. Protests have been staged with deadly clashes. The latest incident? That of Monday in Bamako where heavy fire resounded again in the Badalabougou district. </p> <p>The neighbourhood and its mosque are the stronghold of Imam Mahmoud Dicko, a public figure with a strong following around whom a heterogeneous group has gathered against the president. The incidents are now attracting global attention and the use of deadly force against protesters is being condemned. On the programme with us is Demba Traore. Demba is the spokesperson for the <span class="caps">URD</span> party, Mali’s main opposition party. </p> <a href="https://twitter.com/jerrybambi1" class="twitter-follow-button" data-show-count="false">@jerrybambi1</a><script async src="//platform.twitter.com/widgets.js" charset="utf-8"></script