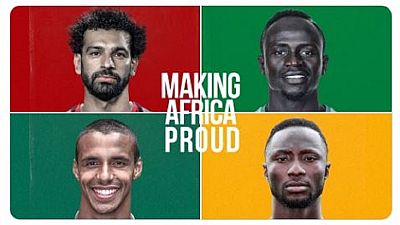 Liverpool won the Premier League after three decades of waiting. The Reds long-awaited victory was sealed when Chelsea beat Manchester City on Thursday evening. The 2019 / 2020 season is yet to end but the points gap between them and City is unassailable.

Jurgen Klopp’s side thus had cause to celebrate through Thursday night, a famous victory without even kicking a ball. They had won their mid-week game against Crystal Palace by 4 unanswered goals.

The Confederation of African Football, CAF, highlighted the impact of Anfield’s African quartet in the feat. CAF described the four players as Kings: ‘Making Africa Proud.’ The four are:

Mane and Salah were joint top scorers last season along with Arsenal and Gabon’s Pierre Emerick Aubameyang. Liverpool are the newest club to have the honour of winning the league – after Manchester United and City, Chelsea, Arsenal, Leicester City and Blackburn Rovers.

The team’s next game is against Manchester City on July 2. The Citizens will be expected to give the new champions a guard of honour at the game which will be played behind closed doors due to COVID-19 regulations since football resumed.