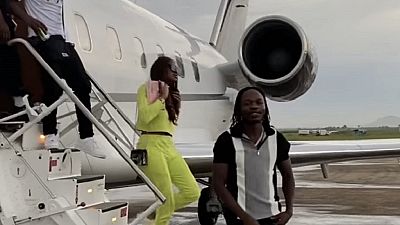 A concert in the Nigerian capital Abuja attracted controversy over the weekend when patrons breached coronavirus restrictions on public gatherings.

Apparently it was an unauthorized concert in the first place. It involved popular musician Naira Marley. But before authorities could deal with the breach, there was a question of how the musician and his entourage arrived in Abuja by air despite a ban on local flights.

A large part of that mystery was unravelled yesterday when Aviation Minister Hadi Sirika disclosed that an operator, Executive Jets, has misled the authorities in the episode.

According to the minister, authorities had given approval for a judge to be allowed to move from Lagos to Abuja and back for official duties unbeknownst to them, ExecuJet had instead flown Naira Marley and his entourage to Abuja for a concert that was not authorized.

The judiciary is classed an essential service under lockdown regulations. Operations of the flight company have been suspended indefinitely, and they are also to be fined. The Flight Captain will also be sanctioned for providing false information.

“Going forward we willl escalate the mechanisms we have in place, and we will be stricter in our approvals (and enforcement),” the Minister stressed.

Meanwhile, a release purported to be from the flight company said they had also been misled into thinking the client in question was a government minister on official duty. That the flight manifest had name of Babatunde Fashola – Minister of Works and Housing.

The FCT Ministerial Task Team on #COVID19 seals up Jabi Lake Mall indefinitely for violating Presidential Task Force’s directives on the ban on public gatherings as part of measures to contain the spread of the dreaded pandemic in the territory. #COVID19FCT pic.twitter.com/JSXJhBb8m3