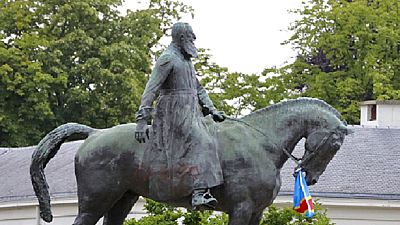 The Belgian city of Antwerp on Tuesday (June 9) confirmed removing a statue of colonial-era leader, King Leopold II. The move comes days after it was defaced by anti-racism protesters.

Leopold is the subject of stern criticism over the role his troops played in decimating Congo in the late 1800s. Reuters reports that two online petitions had been launched seeking his statues across the country to be removed.

During one of the recent protests inspired by the “Black Lives Matter” campaign from the United States, protesters in Brussels climbed a statue of the king waving the Democratic Republic of Congo flag chanting “murderer.”

Elsewhere across the country, his statues were defaced with red paint; signifying blood for the atrocities that his reign unleashed in the Congo. In the city of Ghent, a bust of Leopold II was covered in red paint and daubed with “I can’t breathe.” Another statue was set on fire near the city of Antwerp.

A crowd has climbed onto the statue of colonial King Léopold II in #Brussels chanting “murderer” and waving the flag of the Democratic Republic of Congo where his atrocities took place. #DRC ?? #BlackLivesMatter pic.twitter.com/DIH9MGu39M

A 14-year-old boy only identified as Noah was behind the petitions that continues to gather signatories. It calls for removals of all statues by end of June stressing that a multicultural Brussels, capital of the EU, has no place for such a personality.

“We are minors and do not wish to reveal our identities. This is why we are looking for an organisation … to represent us,” the initiator told Reuters.

History says millions of Congolese are estimated to have died between 1885 and 1908 Leopold II declared the central African country his personal property. Congo was a personal fiefdom of the monarch before becoming a colony of the Belgian state.

His troops were subsequently ordered to collect the hands of victims, who were often shot for resisting slave labour. He is also on record to have imported Congolese for a human zoo in Belgium.