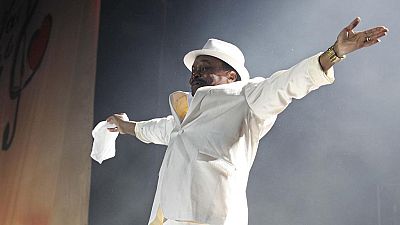 Hundreds of people gathered to mourn the death of Guinean singer Mory Kante in his native country’s capital Conakry on Tuesday, to the sound of keening and traditional musical laments.

Kante, who helped introduce African music to a world audience in the 1980s, died in Conakry on Friday after at age 70 after succumbing to untreated health problems.

Restrictions related to the global coronavirus pandemic had prevented him from travelling abroad to seek medical help.

Born into a celebrated family of “griots” — traditional singer-poets — Kante is best known for his dance song “Yeke Yeke,” which was a huge hit in Africa before becoming a No. 1 in several European countries in 1988.

At a pre-burial ceremony on the grounds of a Conakry hospital on Tuesday, women collapsed in tears as the musician’s coffin was laid inside a tent.

Some 200 people — including relatives, friends and government officials — attended the ceremony, where Mandingo griots sang laments accompanied by kora and balofon music.

Hundreds more mourners stood outside the hospital grounds, and followed the cortege as it made its way to a nearby cemetary.

Kante’s death sparked an outpouring of tributes from musicians and dignitaries across the world.

Guinea’s President Alpha Conde tweeted on Friday that “African culture is in mourning”.