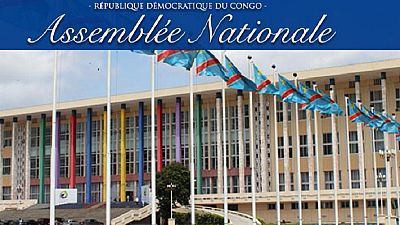 The Democratic Republic of Congo’s National Assembly was the scene of an open-for-all fight when lawmakers moved to remove the first deputy speaker of the house.

Lawmakers rushed to the front of the parliament engaging in violent exchanges over the intended vote as security detail were called in to restore calm. Presiding on the day was speaker Jeanine Mabund, one of handful female speakers in Africa.

The vote eventually took place with 289 out of 500 lawmakers voting in favour of the removal of Jean – Marc Kabund from his post as first vice-president of the National Assembly. Nine members abstained while 17 voted against the petition.

Mr. Kabund, who was absent during the session, is the general secretary and interim president of the ruling UDPS and is a close associate of President Felix Tshisekedi. The latest move has sparked widespread protests across part of the country.

Responding to his dismissal in a tweet, Kabund said: “It’s no surprise to me. This passage in force from the FCC (coalition partner led by ex-president Joseph Kabila) is proof that the plot was hatched and goes beyond my dismissal. As a real Tshisekedist, I leave this post with my head held high and without compromise. Proud to have defended our ideal of combat, our power and the President.”

(the vote did go ahead after this and he was removed) pic.twitter.com/r2SMSZBdg6

Prior to Thursday November 22, 2018; the Ugandan and South African parliaments were on record as places that had ‘hosted’ violent confrontation between lawmakers and security agents.

Zimbabwe joined the list of chaotic parliaments after opposition lawmakers were forcibly removed from the chamber during the reading of the first post-Mugabe budget statement.

Reports indicate that the lawmakers had refused to respect the President Emmerson Mnangagwa who was present in the house to witness the presentation by Finance Minister Mthuli Ncube.

The MPs remained seated as Mnangagwa and his vice-presidents entered the chamber leading to the decision to expel them.

Photos shared on Twitter by the state-owned Zimpapers Images showed a very physical encounter between security detail and lawmakers of the main opposition Movement for Democratic Change – Alliance.

#Zimbabwe MDC MPs after being thrown out of parliament by police during the budget speech
Video credit cyrus_nhara pic.twitter.com/HIuSx1PAhP