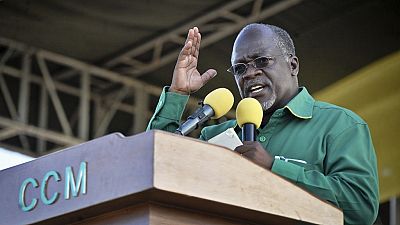 Tanzania president John Magufuli over the weekend spoke about the country’s response to the coronavirus pandemic disclosing that prayers were central to the country’s positive response this far.

Where was he speaking?

Magufuli, a staunch Catholic, was speaking at a church service north-western Tanzania, specifically in his hometown of Chato. He told the congregation that the current evolution of the virus meant: “God has answered your prayers.”

What else did he say?

The president also disclosed that his son had contracted the virus but that he had recovered after treatment.

Which treatment he said included self-isolation, taking a lemon and ginger mixture and steam inhalation, the AFP news agency reported. He added that the child was now well and “doing push-ups.”

On the issue of case statistics, he disclosed that the Amana Hospital in Dar es Salaam was treating 12 patients, which facility was at a point having 198 cases. Other hospitals in Dar es Salaam have experienced similar decreases, he added.

President Magufuli said he’s directed the tourism minister to lift the mandatory quarantine requirement for tourists due to visit #Tanzania in June – provided they don’t have high temperature or other symptoms. He said “some countries” closed borders due to misinformation.

On reopening schools: “The way I see this trend, if the week beginning from tomorrow continues like this, I plan to open places of higher education so that our students can continue with their studies,” he said.

Border closures: Tanzania’s mandatory quarantine for tourists could also be relaxed next month. According to data from the John Hopkins University tracking portral, Tanzania days ago had 509 recorded cases, 183 recoveries and 21 deaths.

President Magufuli says prayers worked as Covid19 cases r declining in Tanzania.
-colleges to reopen soon.
-some Countries closed borders due to ‘misinformation’.
-dismisses funeral ‘rules’ for those that die of virus.
-His child got Covid & recovered by isolating & using lemons pic.twitter.com/feOe6y31dc

President Magufuli is on record to have questioned the efficacy of test kits deployed to detect the virus. According to him, animals and plant samples sent to the national laboratory produced positive results.

The Africa Centers for Disease Control head, dismissed the claim of the president saying that the kits were of international standard. The president subsequently fired head of the national laboratory. The recent firing was of the deputy health minister.

The country is almost the only one on the continent to have refused to close its borders and or impose any restrictions on in-country movement. The World Health Organization’s Africa head also criticized government’s response to the virus.

The US embassy was the latest after it issued a health alert last week about the virus spread and the fact that hospitals in Dar es Salaam were overwhelmed, a claim the president all but disputed in church.

Kenya’s former Prime Minister Raila Odinga is on record to have criticized Magufuli’s response saying the Tanzanian leader does not listen to advice. So far Zambia and Kenya have close their borders with Tanzania to contain spread of the virus in border towns.