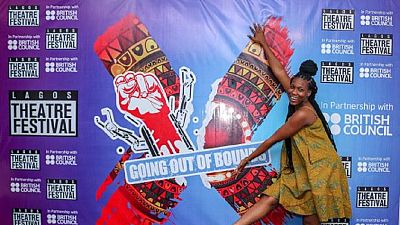 The Lagos theatre festival, is the largest performing art festival held in Lagos Nigeria with over 200 artists.Prison Chronicles was one of the staged play. It depicts the prison and justice system in Nigeria.

In line with the theatre festival instruction, they make do with any location that is available for rehearsal and unconventional spaces for their final presentation.

“It has help my career in so any ways. In terms of producing, my first attempt of producing was at Lagos theatre festival and after that I was able to learn about production or producing a play. And that really motivated e to doing other production myself and when you are talking about the ambiance and what Lagos state theatre festival attracts internationally; I think it doing a lot for the local theatre industry,” said Austin Onuoha director of prison chronicles.

Chibuikem Chris an actor and graduate of urban and regional planning said he has gone for many workshops and acting classes and trainings adding that the classes can be expensive but the knowledge gained is priceless.

It has help my career in so any ways, In terms of producing, my first attempt of producing was at Lagos theatre festival.

“Acting for me has been self-sponsored
because my parents are I won’t say they are against it and I won’t say they are in support of my acting. You know, it up until recently that my parents were like okay go ahead. But you know acting has really been more of self-sponsorship. And I a sponsoring myself in acting based on the money I make from acting which is quiet ironical,” said Chibuikem Chris.

The audience are intrigued with the play
and not bothered by the conditions they have to face in ordered to get entertained.

“One thing I learnt from it was the environment, the serene, the aura of the prisoners what they go through, their lives: it still talked about the criminal justice system in Nigeria, how messed up it is, prisoners who are actually condemned for what they do… the kind of lifestyle they go through in prison.Actually the prison was made for rehabilitation but through this prison chronicles you could see that these guys were not been rehabilitated. They were just been thrown there like they were just been use less in any way,” said Nnamdi Abu an Audience.

Other side attraction at the festival were, the life band which many watched. The market space was open for display of Nigerian made goods While other plays were being performed and watched buy theatre lovers.

Security measures were made a top priority at this year’s event for the audience against the coronavirus.