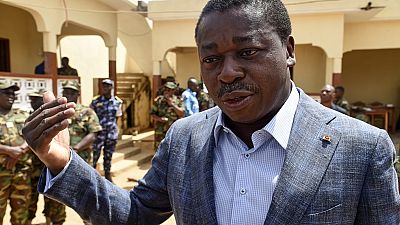 Togo’s president Faure Gnassingbe is confident of securing victory in Saturday’s elections, telling AFP and Le Monde on Thursday that he is not a dictator.

Gnassingbe is aiming to extend his family’s decades-long domination over the West African nation by claiming a fourth term in power.

The country of 8 million goes to the polls on Saturday after the constitution was changed to allow Gnassingbe to run again.

What I can say is that I will always respect my country's constitution.

Critics say the vote will not be fair as the opposition has faced a crackdown to snuff out a wave of protests.

However, Gnassingbe told AFP in a joint interview with Le Monde newspaper that such accusations were “more due to reputation than reality”.

“Sometimes these statements and opinions are exaggerated — in any case, I don’t feel like a dictator,” he said.

The president took over in 2005 after the death of his father Gnassingbe Eyadema, who ruled for 38 years after seizing power in a coup.

“I can’t change my name,” the current leader said.

“I don’t think that my being his son should be a reason for exclusion.”

Gnassingbe said he was “calm and confident” of securing a knockout victory in the first round of the polls.

The opposition has failed to stick together since rocking the country’s ruling clan with huge protests in 2017 and 2018.

“The opposition was able to build a popular movement to worry the regime but then was not able to capitalise on it,” opposition politician Nathaniel Olympio, who is not running in the election, told AFP.

“It shot itself in the foot.”

Parliament approved constitutional changes last May that allowed Gnassingbe to stand in this week’s vote and run for a fifth five-year term in 2025.

The president said he was focused on winning Saturday’s vote and not yet looking ahead to the next election.

“What I can say is that I will always respect my country’s constitution.”

Gnassingbe has made security central to his message as the nation nervously eyes the jihadist violence rocking its neighbour Burkina Faso to the north.

Togo’s Israeli-trained army and intelligence service are among the most effective in the region and so far the country has not suffered any terror attacks.

The president points to the problems in Burkina Faso since Blaise Compaore’s ouster in 2014 as proof that his continued rule is vital for maintaining stability and stopping the jihadist spread.

“The threat is real and the pressure is very strong,” Gnassingbe told AFP as he campaigned close to the border.

He has also made a major play of a flagship programme that aims to provide the entire population with power by 2030 and is pledging to create 500,000 jobs for the youth.