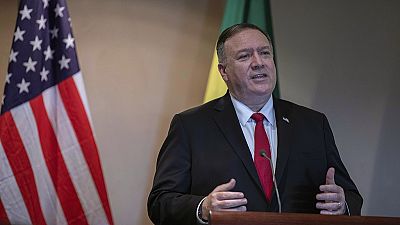 United States Secretary of State Mike Pompeo concluded his maiden trip to the African continent on Tuesday in Ethiopia, where he met the country’s prime minister Abiy Ahmed, the president Zewde Sahle-Work and African Union Commission chairperson Moussa Faki Mahamat among other dignitaries.

Pompeo also visited Angola and Senegal, where he highlighted America’s commitment to pursuing its strategic interests and supporting its African allies.

In this article, we recap some of the key messages that Pompeo shared over his three-legged trip.

If there’s one thing you should know about our president - my boss - you should you know that he loves deals.

During his final leg in Ethiopia, Pompeo took some time to warn South Africa’s government against plans to expropriate land without compensation,saying it would be ‘disastrous’ for the economy.

“South Africa is debating an amendment to permit the expropriation of private property without compensation. That would be disastrous for that economy, and most importantly for the South African people,” he was quoted by Bloomberg news agency as saying.

South Africa’s ruling party has said it is committed to amending the constitution to allow land expropriation without compensation in order to tackle the “historical injustice” caused by the white-minority rule.

Most of the country’s farms and agricultural holdings are owned by white farmers, 72% according to government statistics. White people make up 9% of the population.

In a speech at the U.N. Economic Commission for Africa in the Ethiopian capital, Pompeo reiterated the United States’ warning to African countries against big infrastructure projects financed by Chinese loans.

“Countries should be wary of authoritarian regimes with empty promises. They breed corruption, dependency,” Pompeo said in a speech to diplomats and business leaders.

“They run the risk that the prosperity and sovereignty and progress that Africa so needs and desperately wants won’t happen.”

The Trump administration has repeatedly sought to counter China’s influence on the African continent by questioning the sustainability of China-funded projects and the ability of African nations to repay Chinese loans.

Pompeo also confirmed that the United States was seeking a free trade deal with Kenya.

“If there’s one thing you should know about our president – my boss – you should you know that he loves deals. He wants more to happen between the United States and nations all across Africa,” Pompeo told business leaders.

He however did not give more details about the negotiations that began last month.

Pompeo also hailed the free market generally, blasting “failed socialist experiments of years past” in places like Zimbabwe and Tanzania.

While the United States is working hard to lay out a positive vision for its cooperation with Africa, observers say president Donald Trump’s policy on Africa undermines this.

African countries have been targeted in Trump’s travel bans while the US is currently considering military cuts on the continent.

“Pompeo is unlikely to undo the damage from the Trump administration’s travel bans, the proposed budget cuts, or the president’s disparaging comments about the region,” said Judd Devermont, Africa director at the Center for Strategic and International Studies, a think-tank in Washington.

It is also argued that messages like Pompeo’s are too little too late, considering the benefits that African governments have derived from Chinese support.

“It is undeniable that Chinese investment was quite crucial in keeping Ethiopia on track as one of the world’s fastest-growing economies for many years,” Abel Abate Demissie, an Ethiopian political analyst said.

Abel also argues that Chinese finance more visible projects like roads and buildings while the Americans invest in fields like education and health.

“The fact that Chinese loans and sometimes grants have less bureaucracy also makes it quite convenient for Ethiopia and Africa at large,” Abel said.

In Angola, Pompeo praised president Joao Lourenco’s commitment to the fight against corruption, while he also pledged to support Ethiopia’s political reforms and continue mediating the row with Egypt over a dam on the River Nile.

READ MORE: Pompeo says deal on Ethiopia dam could be reached ‘in months’