Defiant Chaka Chaka says she will 'return to Uganda and perform' 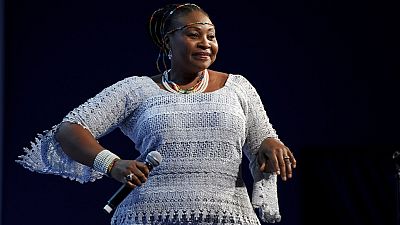 I will come back to Uganda

Celebrated South African musician and global children’s ambassador Yvonne Chaka Chaka says she will come back to Uganda and perform, following her controversial departure from the East African nation on the eve of New Year’s Day.

‘‘I can assure you. I will come back to Uganda and perform. This is my motherland,’‘ Chaka Chaka tweeted.

She went on to reiterate her stance that authorities in Uganda did not deport her, presenting her boarding pass as a business class passenger on a Rwanda Airlines flight as proof.

Chaka Chaka took to social media to set the record straight on her reported deportation.

Chaka Chaka issues reassurances about her wellbeing, and explained why she would not be performing at the Kampala concert.

‘‘I took a decision not to appear this evening at Enkuka, because there were just too many things that I could not understand or explain. If somebody had explained to me, I really would have understood.’‘ she explained.

South African musician Yvonne Chaka Chaka has been deported from Uganda, where she was set to perform at a concert ushering in the new year, police confirmed on Tuesday.

Chaka Chaka was set to perform at the Enkuka concert organised by the king of Buganda kingdom, which has been previously headlined by opposition lawmaker Bobi Wine.

Bobi Wine, who is a fierce critic of president Yoweri Museveni has been reportedly described as ‘the next Mandela’ by Chaka Chaka.

Our friends from abroad have attracted the wrath of the state for openly supporting our struggle for freedom. Today international icon YvonneChakaX2 was deported from Uganda. Whatever reasons the security agencies give, we all know the regime is afraid of her SONGS OF FREEDOM!

The police spokesperson Fred Enanga explained that Chaka Chaka had entered the country using a wrong visa, and was consequently deported.

According to police, Chaka Chaka should have flown in on a working visa.

Ugandans have reacted angrily to news of the deportation describing it as a new low for Museveni’s government.

I remember this ( otherwise it seems rather extreme for #Uganda which is famous for its open door policy and has been known to gift passports to thugs and human rights violators CanaryMugume https://t.co/HRgTRzrLkZ

#YvonneChakachaka
Uganda, just send us back our #Yvonne safely if you don’t want her to perform at your country
We love her here in SA. pic.twitter.com/YtoJMQInsD

You have just deported Yvonne Chaka Chaka and you are here talking about fake Africans. Who is more fake than you ?

It appears her troubles stem from her previous show of support for opposition leaders, including fellow artiste #BobiWine. Too bad #YvonneChakaChaka

Uganda Police and the immigration authorities actually deported YvonneChakaX2. Wow!
I am curious what visas do artists need in order to perform? Who enforces these? What exactly happened?

Meanwhile, president Museveni on Tuesday told veteran musician Kanda Bongoman that it ‘is important to note is that there wouldn’t be music, business or industry without freedom and security’.

The Congolese artist is in Uganda to perform at a different concert ushering in the new year.