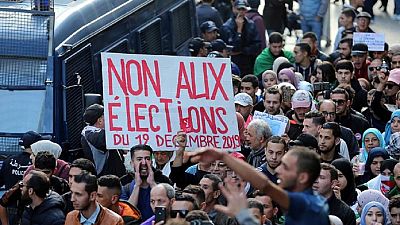 Algeria’s powerful army chief promises that a presidential election on Thursday will define the contours of a new era for a nation where the highest office has stood vacant for eight months.

The tenacious pro-democracy movement which forced leader Abdelaziz Bouteflika to resign after 20 years in power doesn’t believe the claim and is boycotting the vote.

At stake in the election is whether Africa’s largest country, rich with oil and gas and a strategic partner of the West in countering terrorism, will get a fresh start with its next head of state, remain paralyzed by protests or suffer worse under a president lacking popular legitimacy.

The situation is remarkable in a country where the previous presidents were generals or, like Bouteflika, have had the blessing of the army brass since Algeria gained independence from France in 1962 after a brutal seven-year war.

Weekly anti-government protest marches that started in February eventually forced Bouteflika from power, and activists have continued pressing their demands with peaceful demonstrations marked by scores of arrests.

In a nod to the public dissent, the interim government that took over launched an anti-corruption drive that secured convictions of some of the country’s most powerful figures, including Bouteflika’s brother.

Said Bouteflika ran the former president’s inner circle, dispensing political and financial largesse to the favored. He was sentenced in September to 15 years in prison for “plotting against the state.”

The five presidential candidates, among them two other former prime ministers, are all linked to the system the pro-democracy protesters want to bury.

The candidates have been at pains to draw crowds of supporters during the 22-day campaign period. Instead, they have been pummeled with insults during their public appearances, cancelled rallies and avoided regions known for their hostility to the political elite.

Army Chief of Staff Ahmed Gaid Salah has emerged as the leading authority figure inside the power vacuum created by Bouteflika’s ouster. He orchestrated the election, including its date.

Taking its cue from Gaid Salah, the interim government has also promised a new era for the North African nation. To show the military was in step with the democratic times, soldiers were told to vote like other civilians, at polling stations and in civilian clothes.

“The presidential elections will trace the contours of the new Algerian state,” Gaid Salah said in a speech this week, while warning that anyone trying to trouble the voting would face “the force of the law.”

Police intervened with tear gas and water cannon to hold back protesters as former Prime Minister Ali Benflis held a campaign rally in Bouira, east of the capital.In the rancorous pre-election atmosphere, some officials have lobbed their own insults and threats, mimicking the army chief with claims that election opponents were manipulated by an unnamed foreign power.

The interior minister, Salah Eddine Dahmoune, branded them as “traitors” and “homosexuals” in remarks this month before the high chamber of parliament. Days later, the army review, El Djeich, tendered the ultimate insult, referring to those opposing the voting as either “lost” or “new Harkis,” a reference to Algerians who fought for France during the independence war.

Candidates have largely substituted platforms with concrete proposals for a litany of promises about promoting democratic freedoms or fighting unemployment among youth. Last week, after candidates participated in a presidential debate that was a first for Algeria, commentators deemed the event “catastrophic.”

Benflis, 75, said during the debate that he chose to seek the presidency “knowing that all conditions are not met. But if I am elected, my top priority would be to engage in a dialogue with the opponents of the presidential election.”

With public polling not permitted in Algeria, there was no firm indication on the eve of the election which of the five contenders may have the upper hand with voters. Another former prime minister, Abdelmadjid Tebboune, 74, was until recently considered the favorite due to his reportedly close ties with Gaid Salah.

Now, the media are touting Azzedine Mihoubi, 60, a writer and poet with deep ties to the toppled Bouteflika regime. Mihoubi, a former culture minister, took over leadership of the National Democratic Rally party, which has governed in alliance with the FLN, the sole party for nearly three decades and now in tatters.

A group of 19 nationally known figures who oppose Thursday’s election have called on protesters to remain peaceful and asked authorities to avoid threats and provocation.

The president of the Algerian League of Human Rights, Noureddine Benissad, said that Algerians, including jailed protesters, were not against the principle of elections.