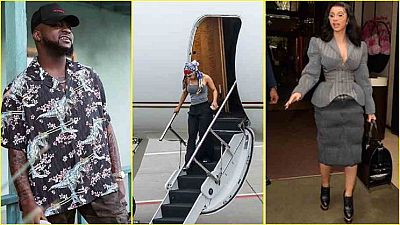 American rapper Cardi B arrived in Nigeria’s commercial capital Lagos on Thursday for the start of her two-nation African tour. Cardi B will perform at an event on Saturday with Nigerian afrobeat star, Davido.

Social networks platforms – Twitter and instagram – have since been discussing issues around her visit – from when she arrived in Lagos through to what she said in her initial observations and about why she used a nose cover when she got to her hotel.

She arrived aboard a private jet which dropped her at Murtala Muhammed International Airport in Lagos before she was driven to the Victoria Islands where she is lodging.

She has since granted an interview on a local radio station, she posted a video on instagram asking that she wanted to eat Nigerian jollof rice. She also met fans and took a series of photos with them.

Cardi B with her fans in Nigeria! ?? pic.twitter.com/vT5s85jx2E

Real name, Belcalis Marlenis Almánzar, Cardi B, danced to Davido’s famous track “Fall” on the plane that was carrying her to Nigeria. She sang a rendition of the track which Davido confirmed later on Twitter that the two had recorded in February 2019 but it never got released.

Davido, real name David Adedeji Adeleke, is a music star who has achieved continent-wide fame for his songs. He will perform with Cardi B at the Lagos event today.

After her Nigeria gig, she is expected to fly to Ghana where she will perform at a concert in the capital Accra.

Exclusive videos of Cardi B ! Courtesy of the slippery club! 12 temple, ikoyi! Tickets available! Order from slippery club! Abi u no wan see cardi b?? pic.twitter.com/eKuqEaX1Al

Y'all ain't ready for this madness!!
pic.twitter.com/e1K23ft2W7