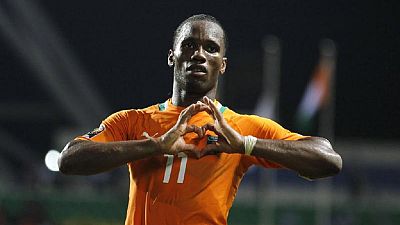 <p>Ivorian and Chelsea legend, Didier Drogba, on Thursday confirmed his intention to contest the presidency of the country’s football federation.</p> <p>According to the 41-year-old, he had picked Ivorian football ahead of an offer to have taken a role at his former club, English Premier League side, Chelsea.</p> <p>“ I could’ve decided to stay at Chelsea where all conditions are perfect, but I’ve decided to invest in local (national) football because I love Ivory Coast,” he is quoted to have said.</p> <blockquote class="twitter-tweet"><p lang="fr" dir="ltr">Didier <a href="https://twitter.com/hashtag/Drogba?src=hash&ref_src=twsrc%5Etfw">#Drogba</a> ,candidat à la Présidence de la Fédération Ivoirienne de Football : <br /> «Je pouvais rester à Chelsea où toutes les conditions sont réunies. Mais j'ai décidé de venir m'investir dans le football local parce que j'aime mon pays la Côte d'Ivoire » <a href="https://twitter.com/hashtag/CIV?src=hash&ref_src=twsrc%5Etfw">#CIV</a> <a href="https://t.co/QxMkPVsfCW">pic.twitter.com/QxMkPVsfCW</a></p>— Lassana Camara 🎙📻🎤 (@lassanawelt) <a href="https://twitter.com/lassanawelt/status/1194881132594159616?ref_src=twsrc%5Etfw">November 14, 2019</a></blockquote> <script async src="https://platform.twitter.com/widgets.js" charset="utf-8"></script> <p>In August 2019, local media outlets reported that Drogba was due to contest for the top leadership post of the Ivorian Football Federation, <span class="caps">FIF</span>.</p> <p>The former Chelsea man was reported to have filed his application at the time. All things being equal, he will face competition from among others, a former playing colleague turned politician Bonaventure Kalou, who was in October 2018 elected mayor of the municipality of Vavoua.</p> <p>Incumbent <span class="caps">FIF</span> president Augustin Sidy Diallo, will be another candidate to beat. He has been in the role since 2011.</p> <p>Drogba retired from football in 2018 and was on record to have voiced ambitions of heading the football federation in the West African country. </p> <p>“It’s something that interests me: I want to get more involved. I think more and more about it. I know Ivorian football, I have played in selection for years and I invested in Ivorian football lately … </p> <p>“I have not made my decision yet, but, if all conditions are met, why not?” he said in an interview on French broadcaster, <span class="caps">RFI</span>.</p>