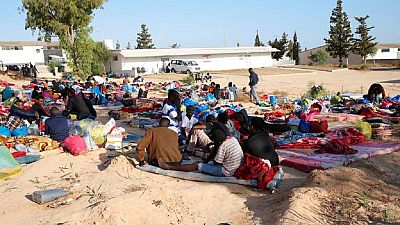 Hundreds of migrants have fled a detention center in coastal Libya and crowded overnight around a U.N. facility, saying they were denied food for weeks.

Around 450 people left Abu Salim detention center late Tuesday. Two of the migrants, as well as activists, said they were forced to beg for money from families to pay police to buy them food. Those who couldn’t pay went hungry.

The migrants spoke Wednesday on condition of anonymity, fearing for their safety. They walked about 90 minutes through the city of Tripoli, according to Tarik Lamloum, a Libyan activist.

The current situation reflects the dire situation faced by many refugees and asylum-seekers in Libya.

The U.N. refugee agency says the facility is already overcrowded, with about half the 800 people inside arriving informally, including many from another detention center that was hit last summer by an airstrike. The Libyan government agency that runs the detention centers blocked the migrants from entering, the U.N. said.

The government-linked centers for migrants are rife with abuse and many, especially those in Tripoli, get caught in the crossfire of the country’s civil war. With increased fighting and reports of torture, Europe’s policy of supporting the Libyan coast guard as it intercepts people fleeing Libya has come under growing criticism.

Jean-Paul Cavalieri, the U.N. refugee agency’s chief of mission in Libya, said there was no space for more people inside the facility and that officials were on site to offer options.

“The current situation reflects the dire situation faced by many refugees and asylum-seekers in Libya,” he said in a statement.

The migrant who spoke with AP said U.N. officials advised the group to return to Abu Salim or another detention center and warned them they would not be allowed inside like those who fled the Tajoura center after the airstrike.

Separately, a group of smugglers and 14 Egyptian migrants were detained before embarking on their journey to Europe on Tuesday in the northern Libyan city of Sirte, according to Taha Hadid, a spokesman for the Sirte Protection Force.