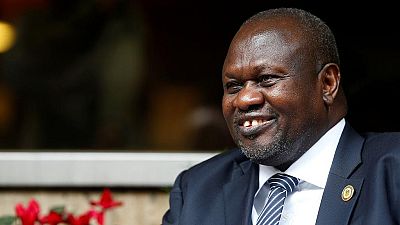 South Sudanese rebel leader Riek Machar ON Saturday arrived in Juba to try and save the fragile peace agreement as the mid-November deadline for forming a government with President Salva Kiir approaches.

The two men “will meet behind closed doors at the presidential palace today,” said a spokesman for Machar’s SPLM-IO party, Manawa Peter Gatkuot, after the rebel leader arrived.

South Sudan plunged into civil war in December 2013, two years after its independence from Sudan, when Mr. Kiir, a Dinka, accused Machar, then his vice-president, a member of the Nuer ethnic group, of plotting a coup d‘état.

The conflict, marked by atrocities and the use of rape as a weapon of war, has killed more than 380,000 people and forced more than four million South Sudanese, nearly a third of the population, to leave their homes.

The peace agreement reached in September 2018 has led to a sharp drop in fighting, although it has not completely ceased. The deadline negotiated in May was intended in particular to allow the cantonment of combatants and their integration into a unified army, but little progress has been made since then.

The deadline for the formation of this government, in which Machar is to assume the position of First Vice-President, has already been delayed before being set for 12 November.

In addition, technical aspects of the agreement, such as those relating to the demarcation of borders between States, have not made any progress.

Machar, who lives in exile in Khartoum, also seeks guarantees for his personal safety before returning permanently to Juba, which he fled under heavy fire when a previous peace agreement collapsed in July 2016.

Efforts to have the warring parties confine their troops to a unified army – a crucial point of the peace agreement – have made little progress.

According to observers, the only way forward, in the absence of progress on such sensitive issues, is for Machar and Kiir to reach a new political agreement that will allow them to move forward with the formation of a power-sharing government.