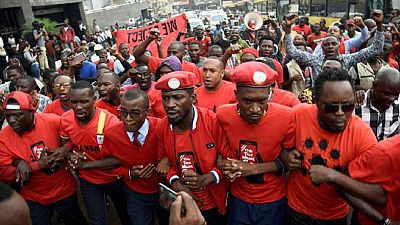 <h2 style="font-size:16px;">Arrested for violating ban?</h2> <p>Police in Uganda on Thursday detained six supporters of pop star and presidential hopeful Bobi Wine for wearing red berets, a banned symbol of his “People Power” pressure group, a spokesman for the movement said.</p> <p>Joel Senyonyi, spokesman for Wine’s People Power movement, told Reuters the youths were detained in Kabalagala, a suburb in the south of the capital Kampala where they were holding a news conference to denounce the government’s red beret ban.</p> <p>“The youths were emphasising that we commit no offence when we wear these berets,” Senyonyi said, adding that police stormed the event and detained the six while others fled.</p> <p>“The beret, it’s our symbol. When we wear those berets we identify not just with People Power but with the cause for a better Uganda,” he said.</p> <p>Police spokesman Patrick Onyango however told Reuters Wine’s supporters were arrested for staging an unlawful assembly because they had not notified the police in advance.</p> <p>Wine and supporters of the People Power movement that he hopes will help him unseat veteran leader Yoweri Museveni at the next presidential election have been wearing red berets and other items of red clothing including shirts and overalls.</p> <p>Last month however the government banned civilian use of red berets, describing them and other pieces of military wear as “property of the state”.</p> <p>Civilians found wearing or selling them, the government warned, would be prosecuted under military law, which can mean a life sentence.</p> <h2 style="font-size:16px;">Red berets banned</h2> <p>Authorities in Uganda announced on Monday that the red beret and tunic would henceforth be designated as official military clothing, essentially banning the uniform of opposition leader Bobi Wine and his supporters.</p> <p>The pop star turned leading opposition figure, who has announced he is running for president against longtime leader Yoweri Museveni in 2021, has made the red beret his signature, calling it a “symbol of resistance”.</p> <p>However the beret, also worn by some soldiers, was included in Uganda’s first ever gazette of all military clothing, which states that any member of the public found in possession of the items “is liable on conviction to imprisonment for a term not exceeding five years.”</p> <p>“The dress code for the <span class="caps">UPDF</span> (Uganda People´s Defence Forces) has been gazetted. The action was endorsed by the top organs of the army which also commended the dress committee for concluding the task assigned to it years back,” army spokesman Richard Karemire said in a statement.</p> <p>“It manifests the commitment to define identity and outlook of a professional army as well as adhering to the <span class="caps">EAC</span> (East African Community) protocols,” he added.</p> <h2 style="font-size:16px;">People Power reacts</h2> <p>Bobi Wine, whose real name is Robert Kyagulanyi, did not comment on the new rules as he is out of the country. However a leading figure in his “People Power” movement, which he has yet to register as a political party, said they would not stop wearing it.</p> <p>“We shall continue to wear the revolutionary red berets,” said youth leader Ivan Boowe.</p> <p>“No amount of intimidation will make us fear to exercise our rights. By designating our dress code as a military wear, the government is moving to attempt to ban the People Power Movement and we are ready to face any action government takes,” he added.</p> <h2 style="font-size:16px;">Ugandans react</h2> <blockquote class="twitter-tweet"><p lang="en" dir="ltr">Didn’t realize the <span class="caps">UPDF</span> has a monopoly on all red berets including the ones with different logos. Looks like another excuse to arrest opposition supporters on behalf of <a href="https://twitter.com/NRMOnline?ref_src=twsrc%5Etfw"><code>NRMOnline</a>. <a href="https://t.co/3RzTQUPI98">https://t.co/3RzTQUPI98</a></p>— Daniel Kawuma (</code>Kawuma) <a href="https://twitter.com/Kawuma/status/1178530763345711104?ref_src=twsrc%5Etfw">September 30, 2019</a></blockquote> <script async src="https://platform.twitter.com/widgets.js" charset="utf-8"></script> <blockquote class="twitter-tweet"><p lang="en" dir="ltr"><span class="caps">UPDF</span> attempts to <span class="caps">BAN</span> <span class="caps">RED</span> <span class="caps">BERET</span> are outside definition of uniform in S.164(5) of the <span class="caps">UPDF</span> Act “In this section, uniform means any article of wearing apparel & includes a badge, button, braid, or insignia, worn in association with any particular item or items of clothing or a tie” <a href="https://t.co/lNiKzSr0CN">pic.twitter.com/lNiKzSr0CN</a></p>— Bireete Sarah (@SarahBireete) <a href="https://twitter.com/SarahBireete/status/1178581380772573184?ref_src=twsrc%5Etfw">September 30, 2019</a></blockquote> <script async src="https://platform.twitter.com/widgets.js" charset="utf-8"></script> <blockquote class="twitter-tweet"><p lang="en" dir="ltr">Those banning the red beret will soon ban the alphabet!</p>— Thomas (@tomddumba) <a href="https://twitter.com/tomddumba/status/1178556744164884480?ref_src=twsrc%5Etfw">September 30, 2019</a></blockquote> <script async src="https://platform.twitter.com/widgets.js" charset="utf-8"></script>

We shall continue to wear the revolutionary red berets.