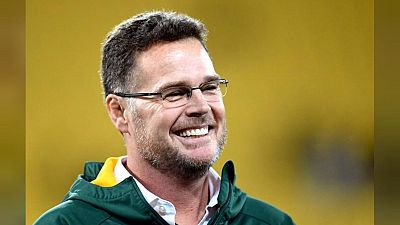 South Africa coach Rassie Erasmus feels vindicated in his side’s early arrival in Japan for the Rugby World Cup, even though it will mean their stay in the country will stretch to nine weeks if they make the November 2 final.

“We have achieved a lot of the objectives we set in coming early to Japan,” Erasmus told reporters at the team’s base on Friday.

“The first was to get to know the country, the people, how things operate here, and to be comfortable in the country and we’ve achieved that.

We have achieved a lot of the objectives we set in coming early to Japan.

“The second one was to get some match time against good opposition, which was Japan, and we achieved that. And then obviously the third one was to get the guys used to the climatic conditions, not just the heat, but the humidity, both in match and in training.”

Captain Siya Kolisi agrees and says the preparation work they have put in now will help them finish strongly in matches.

“We know how to handle the conditions now and the fact that our training has been very hard means it will stand us in good stead. The benefits will come through later in the games,” he said.

The Bok players will be given a few days off with their families after their final pool game against Canada in Kobe on October 8, ahead of the start of the knockout stages.

Erasmus has also praised the welcome his side has been afforded, and the enthusiasm of Japanese people to embrace the tournament.

“Something that has stood out for me – and I don’t think I’ve seen this anywhere else – is the people of the host nation wearing the jersey of the visiting team – the Springbok badge,” the coach commented.

“I think that’s been amazing to see the Japanese people wearing the Springbok jersey. I think that shows a lot of respect and I think we can learn a lot from that.

“It makes us proud to see that and I think you can be proud of how you have supported the World Cup and adopting teams that are visiting here and making them feel at home.”

The Boks open their campaign against New Zealand in Yokohama on Sept. 21 and will also play Italy, Namibia and Canada in their pool.