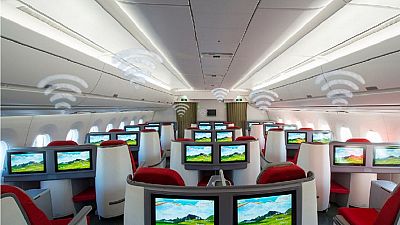 <p>Africa’s biggest and most profitable national carrier, Ethiopia Airlines, have announced a new on-board service for its customers – Wi-Fi connectivity whiles flying.</p> <p>The Airline posted on social media that it had launched the service which will start with its A350 fleets. They added that the service will use the latest broadband satellite technology (Ka-band).</p> <p>“With the state-of-the-art broadband satellite technology, passengers can now enjoy reliable connectivity while flying over the clouds,” the Airline said. It did not specify whether the service will be free or at a cost.</p> <iframe src="https://www.facebook.com/plugins/post.php?href=https%3A%2F%2Fwww.facebook.com%2FEthiopianAirlines%2Fposts%2F2529218313829530&width=500" width="500" height="434" style="border:none;overflow:hidden" scrolling="no" frameborder="0" allowTransparency="true" allow="encrypted-media"></iframe> <p>The A350 belongs to the Airbus manufacturer, one of the main clients of Ethiopian. According to a <a href="https://www.businessinsider.com/how-airplane-wifi-works-2018-9">Business Insider report</a>, Airbus didn’t enter the market until 2005. </p> <p>“Incredibly, inflight WiFi is a relatively recent development. For instance, Boeing didn’t get into the business until 2001,” the report said. “Gogo, one of the biggest names in the business didn’t come online until 2008,” it added.</p> <h3>About Ethiopian Airlines</h3> <p>The airline currently flies to over 50 African cities in what is the largest network by a national carrier. It is also in talks to help about a dozen African countries to establish and manage their carriers.</p> <p>Ethiopian – a member of the Star Alliance group in its seven decades of operation has become one of the continent’s leading carriers in terms of efficiency and operational success.</p> <p>They command the lion’s share of the pan-African passenger and cargo network operating the youngest and most modern fleet to 95 international destinations across five continents.</p> <p>It is the first African operator to take delivery of the Boeing 787-9 dreamliner. Its operations have transformed the Bole International Airport in Addis Ababa into a continental hub.</p>