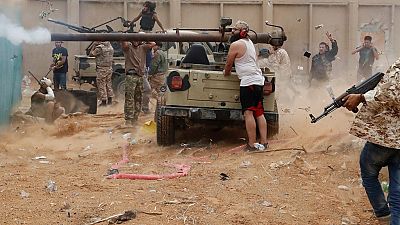 The two-day cease-fire — proposed by the U.N. — was the first since the self-styled Libyan National Army led by commander Khalifa Hafter launched an offensive in April to capture Tripoli from a U.N.-supported but weak government.

The strikes focused on the road linking the city center with a shuttered old airport that Hafter’s forces took back in April, as well as the neighborhoods of Wadi el-Rabie, Khallat el-Fujan and Suq al-Jumaa, the officials said.

The militias allied with Tripoli’s U.N.-backed government also shelled Hafter’s forces in the southern and eastern outskirts, they said.

Tripoli health officials said no civilian casualties were reported on Tuesday. All officials spoke on condition of anonymity because they were not authorized to talk to reporters.

On Saturday, both sides had accepted the truce ahead of the holiday, though they later each claimed the other had violated the cease-fire.

Authorities at the Mitiga airport, Tripoli’s only functional airport, suspended flights for several hours Sunday after reporting that a shell fell just meters (yards) away from the runway. The Tripoli militias blamed Hafter’s forces for the shelling.

Hafter’s forces did not immediately respond to calls seeking comment but they have shelled the airport in the past, claiming the militias were using it as an air base.

Hafter’s offensive on Tripoli has made little progress amid stiff resistance by the militias. The fighting has killed over 1,100 people, mostly combatants, and displaced more than 100,000 civilians.