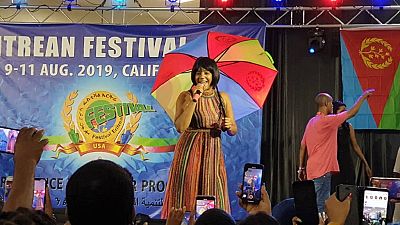 Tiffany Haddish, famed American actress and comedian was in full Eritrean regalia over the weekend at a national event of the Horn of Africa nation in the United States.

The festival which was emblazoned in Eritrean national colours and paraphernalia was held between August 9 – 11 in California. Haddish, who months back secured Eritrean citizenship, was one of several entertainers at the event.

Haddish is seen in with a long multi-coloured dress holding an Eritrean umbrella and draped in the national flag as she entertained the gathering. Much like earlier this year when she returned home to join independence day celebrations on the streets of Asmara.

TiffanyHaddish has proved she has the #Eritrean mettle! #Eritrea pic.twitter.com/CmaLHo3CbH

According to Information Minister Yemane Ghebremeskel, aside the diasporan acts, famous local artistes were also part of the festival.

The Eritrean festival in North America was part of the wider Annual Conference of the National Council of Eritrean Americans (NCEA). This year’s event was convened in the Bay Area, California.

The Face2Face Africa news website wrote about Haddish’s parentage: “(She was) Born in Los Angeles to an African-American mother and Eritrean father.

“Haddish visited the Horn of Africa nation last year (2018) in what was an emotional homecoming to bury her father and also meet and connect with her relatives. Haddish’s father, Tsihaye Reda Haddish, entered the United States as a refugee.”