Third Ebola patient in Goma as 15 quarantined in Lake Kivu 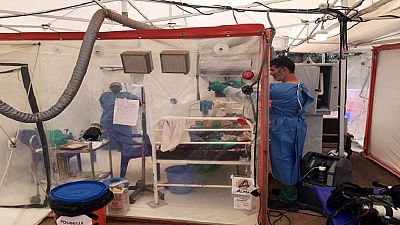 A third patient tested positive for the virus on Wednesday, shortly after second Ebola patient died in Goma, a large city in the eastern Democratic Republic of Congo, raising concern in the region about an epidemic.

In the neighboring province of South Kivu, fifteen people were quarantined in a locality on Lake Kivu. This is the first time that suspected cases of Ebola have been reported in this province.

“The confirmed Ebola patient in Goma is dead, all measures to cut the chain of contamination are already taken,” Jean-Jacques Muyembe, the new official appointed by the Congolese presidency to coordinate the response, told AFP. the epidemic.

We ask the population not to hide the suspected cases.

This patient had arrived at the treatment center “on the 11th day of his illness, it was really hopeless because the disease was already at a very advanced degree, so he died on the night of Tuesday to Wednesday,” said his doctor. Dr. Aruna Abedi, coordinator of the Ebola response in North Kivu province.

“We ask the population not to hide the suspected cases.The treatment center is not a deathbed, we must bring the patient in time,” he insisted.

Dr. Aruna Abedi also announced that a third case of the virus disease was detected Wednesday in Goma, a large urban center in the east of the country, sixteen days after the first case and one year after the outbreak was declared. haemorrhagic fever in rural areas of North Kivu and Ituri in eastern DRC.

“This third case confirmed is the girl, one year old, this father of ten children with Ebola and died today (Wednesday) at CTE Kiziba”, told AFP an official of the response who wished to remain anonymous.

City of one to two million inhabitants, Goma is located on the edge of Lake Kivu and on the border with Rwanda. Anxiety has won over the inhabitants after the announcement of the second death due to Ebola.

“I am now afraid that this disease will affect us all, we heard about it from afar and now the virus is in our city,” said a 27-year-old worker, Anuarite Sifa.

Since the declaration of the epidemic on August 1, 2018, no case has been recorded in the Congolese capital, Kinshasa, which is two hours by plane from the main sources of infection.

The disease has so far been relatively circumscribed but the appearance of cases in a city like Goma reinforces the threat of a spread of the epidemic already responsible for 1,803 deaths, according to the latest figures released Wednesday by the authorities.

Wednesday before noon, five boats from Goma were immobilized in the port of Bukavu, on the other side of Lake Kivu, causing concern in another city in eastern DRC.

A fast boat with medical staff and representatives of the town hall went to meet the boats immobilized a few meters from the dock for a control of manifests, said a correspondent of AFP.

“What are we going to do if Ebola arrives here where there is no proper health infrastructure, or a vaccination announcement for prevention?” Asked a family man, Leonardo Malekera. “Back to school is soon, if the disease reaches Bukavu, it will be a disaster.”

“I’m not going to shake hands with people anymore,” said a 22-year-old woman.

“In Bukavu, there is no case of Ebola, the population must not panic but must comply with hygienic standards pending the control that takes place in the boats that come from Goma,” said the authorities in a news release.

Several boat rotations, some carrying up to 500 passengers as well as goods daily connect Goma and Bukavu (one and a half million inhabitants).

“The psychosis that wins Bukavu is based on trade between Bukavu and Goma across Lake Kivu,” said Jean-Chrysostome Kijana, president of the Civil Society of South Kivu who calls the authorities to take things “seriously “.

“Harbor services should not be complacent in the development and control of manifests”, as passengers usually go down the route, he added.