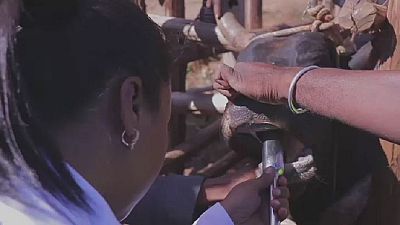 In the Central part of Madagascar, authorities are chipping cattle in order to restore security.

It follows a campaign promise by President Andry Rajoelina, who assumed office this year. The town of Tsiro-anoman-didy is known for its zebu. It is a type of cattle with large hump on its back.

‘‘This is a bolus (capsule/ dose), inside, there are chips to identify the zebu, they are the same ones we use for our phones, it’s also geo-localisable, this is the tool to insert the capsule, you put the capsule inside, you push it inside the mouth of the animal, it then goes inside the stomach of the animal and stays there until its death”, said Veterinarian, Ravelonjatovo Vololona.

We use these details in the software to find out on the map where the zebu is at that time.

The chip was developed by a Malagasy society called Genius Technology Company. 10,000 electronic chips are due to be inserted in cattle over the next three months.

“When it’s stolen, we can find the location of the zebu thanks to the software, we send a text to find out the geographic details of the zebu, the bolus (the chip) sends feedback, sends an answer to us, and we use these details in the software to find out on the map where the zebu is at that time”, said Dera Rakotoarivelo, Manger in charge of Communication and Marketing at Genius Technology Company.

A zebu can be sold on the market for between 200 and 300 euros. It is a lot of money in poverty-stricken Madagascar. Here, the World Bank estimates that 75 percent of the people live on less than $2 per day.

“When the thieves attacked, many of our friends were killed, including members of my family. My little brother was killed by the thieves. He suffered from 8 gunshots. The thieves don’t distinguish, they fire on everyone, including women and children”, Rasolonjanahary Andriatsiferana Richard, a farmer said.

The device works for 7 years, which is the average lifespan for zebu. When the animal dies, the chip is deactivated.

The government hopes to insert half a million of these chips to track 2.5 million heads of cattle.

For the first three months, officials are inserting the chip which costs between $6 and $10 for free. But long term funding for the project is yet to be confirmed

Cattle theft is a national plague in Madagascar with 30,000 animals stolen in 2017. According to police and farmers, security forces often get killed in clashes with thieves.