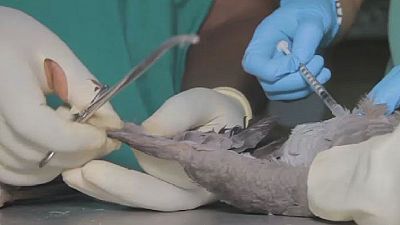 Dr. John Anyam spends most of his time assisting birds at the Limbé Wildlife center in Cameroon.

They are mainly African Grey parrots who were dehydrated and ridden with parasites.

These parrots were rescued with their feathers cut by poachers to prevent them from flying.

We are rehabilitating them for release.

“So we rescue, we rehabilitate and then we release, like these parrots that are rescued, we are rehabilitating them for release. So doing a general health check, pulling off the clipped feathers, pulling off feathers that are destroyed by glue is to stimulate fast growth of new feathers, that can enable them to fly”, Dr. Anyam said.

The Grey parrot is coveted for its ability to imitate noise, and even human speech.

It is one of the most popular pets in Southern Cameroon. The 19 birds were being smuggled to neighboring Nigeria.

The Limbé Wildlife Center, the only one in Cameroon, receives about 5 to 25 parrots per month from across the country.

“The parrots, some of them come here in a very bad shape. When parrots are rescued from the poachers, there are put in tiny, they come in tiny boxes and they have been in those boxes for days, there is a time-lapse, from the time they are rescued to the time they get to us here. So they have been cramped in those small boxes for many days. They might not been having a enough water, not having a enough food so their respiration has been quite bad”, Dr. Anyam added.

In 2016, this highly coveted parrot species was placed on the U.N’s
Convention on International Trade in Endangered Species of Wild Fauna and Flora (CITES), Appendix I.

It prohibits all cross-border movement in the birds or their body parts for commercial purposes.

According to the Washington Convention, the animal is the best-selling wild bird in the world. An African Grey parrot sells for thousands of US dollars on the global market.