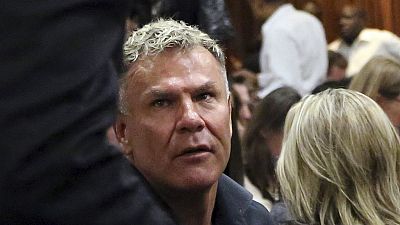 Social media users are reacting to the killing of a former South African footballer, Mark Batchelor, on Monday evening near his home in Johannesburg.

A police spokesman confirmed to local media outlets that the incident is likely a case of a professional hit adding that a murder case was being investigated.

Batchelor played for some of the country’s top clubs including Orlando Pirates and Kaizer Chiefs. He also played for the senior national team, the Bafana Bafana at a point in his career.

“He was shot through the window several times and died at the scene,” police spokesperson Col Lungelo Dlamini is quoted as saying.

“The motive for the attack is unknown at this stage as nothing was taken. No suspects have been identified. Police are investigating a murder case,” he added.

South Africa has some of Africa’s biggest gun-related crimes with people being gunned down, carjacking and even attacks on bullion vans.

A photo widely shared on social media shows a window ridden with bullets. With reports indicating that he was shot at close range, seven times.

He was mourned by former colleagues and South Africans in general – praising his commitment to the game whiles others bemoaned the chaotic security situation that allows people to be killed by hit men.

“He was a player who was always looking forward to the next training session. He wanted to win, and losing was not part of his vocabulary,” Orlando Pirates mate Steve Lekoelea said.

“He always wanted to perfect his game and he was a team player. I’m devastated by his passing away,” he added.

As South Africans, we need Death Penalty back, we are SICK & TIRED of wrtng RIP 2 innocent Souls. Not so long, it was:
1 Senzo Meyiwa
2 Lucky Dube
3 Reeva Steenkamp
4 Mafikizolo Star and others.

As the Royal Eagles Football Club, we are joining millions of fellow South Africans in sending our deepest sympathy and condolences to the family and friends of the late former Orlando Pirates & Kaizer Chiefs player Mark Batchelor. Rest in peace qhawe. #RIPMarkBatchelor pic.twitter.com/eCX5T7FcSQ

You’ll get nothing by sharing a pic of a gruesome death. Dead because of a cellphone and money he supposedly had.

I worked with him for many years on TV