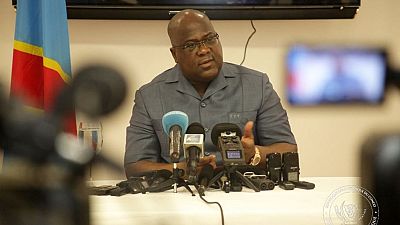 The president of the Democratic Republic of Congo Felix Tshisekedi said on Tuesday that an ‘attempted genocide’ is happening in the northeastern province, after a wave of violence that has killed scores of civilians and forced tens of thousands from their homes in less than a month.

Tshisekedi has ordered the army to launch a “large-scale” operation against armed groups operating in Ituri province, where local authorities say at least 160 civilians have died since June 10 in clashes between the militias.

Who is plotting against Kinshasha?

The DRC leader, speaking as he wrapped up a three-day visit to the province, said the fighting appeared to be a “plot” and vowed to “find out the truth” about who was behind the unrest.

“Clearly, this looks like an attempt at genocide. To push Ituri to ignite,” he said at a press conference in the Ituri city of Bunia, adding that the aim was apparently to “destabilise the power of Kinshasha”.

The UN refugee agency has said instability has forced more than 300,000 people to flee their homes, with people escaping unrest in Djugu territory especially.

In June the UN agency voiced deep concern over the surge in displaced people and said it had seen “multiple attacks” involving the Hema and Lendu groups.

On Sunday Tshisekedi announced a major military operation in Ituri’s Djugu and Mahagi territories, with the offensive extending to South Kivu province to put a “definite end” to the dozens of militias roaming the lawless, mineral-rich region.

He said his government had devised a plan for the “complete eradication” of foreign armed groups, in collaboration with the UN peacekeeping mission MONUSCO and neighbouring countries affected by the violence, particularly Uganda and Rwanda.

The army announced last week it had taken control of the stronghold of the Ngudjolo militia, which has been blamed for the latest bloodshed, in an offensive backed by MONUSCO.

Tshisekedi, who came to power in January, urged people to “love one another… this is the province of all Iturians. There is room for everyone” on a visit to displaced communities.

“I hope his presence will bring peace in Ituri,” said Victor Ngona, a spokesman for the Hema community, which feels particularly targeted by the killings.

The UN’s World Food Programme (WFP) said it was more than doubling aid in the Ituri province, adding that many of the newly-displaced were malnourished and had moved numerous times, many seeking safety in towns or in the bush.

“Our hearts go out to the latest victims of this senseless cruelty, most of them rural villagers who have had to run for their lives, with little or nothing, right at harvest time,” Claude Jibidar, the WFP´s representative in the Democratic Republic of Congo, said in a statement.

The WFP is already assisting 116,000 internally-displaced people in Ituri each month, providing them with food and small payments of cash to survive.

A history of deadly violence

Tens of thousands of people died in clashes between the Hema and Lendu ethnic groups between 1999 and 2003 in Ituri.

Ituri is not the only part of DRC wracked by unrest.

Ituri and North Kivu province, just to the south, are also trying to roll back a major epidemic of Ebola that has claimed more than 1,500 lives since last August. Both provinces sit on DR Congo’s eastern border with Uganda.