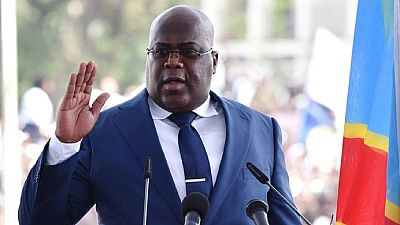 <p><strong>Democratic Republic of the Congo President Felix Tshisekedi has confirmed “large-scale” military operations in Ituri (north-east) after massacres of civilians, as well as an “eradication plan” of foreign armed groups.</strong></p> <p>“I have just ordered our armed forces to conduct large-scale operations in the Djugu and Mahagi territories,” said the president for his first message on the occasion of Independence Day on June 30, 1960.</p> <p>Dozens of civilians were massacred in these two territories according to local authorities who point the responsibility of a militia whose army claims to have recovered the stronghold.</p> <p>“I decided to commemorate June 30th in Ituri province,” said the expected president this Sunday in provincial capital Bunia.</p> <p>“These operations will extend to Minembwe in South Kivu to put an end to the adventures of all the outlaws,” the president added.</p> <p>He also announced a “plan for total eradication” of foreign armed groups under discussion “with Monusco (United Nations Mission in Congo) and neighboring countries concerned” (mainly Uganda and Rwanda).</p> <p>He praised the “political relaxation” he has been following since his inauguration: “The political exiles are back, the meetings and demonstrations are held without any hindrance”.</p> <p>“I refuse that some malicious leaders can confuse democracy and anarchy,” he repeated. The head of state on Saturday used the same argument the day before to endorse the ban on a demonstration by his former opposition allies this Sunday in Kinshasa.</p> <p><em><span class="caps">AFP</span></em></p>